A Discovery of Witches by Deborah Harkness 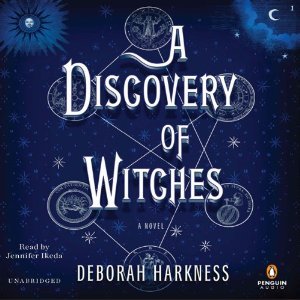 Title: A Discovery of Witches

I have wanted to read A Discovery of Witches since I first saw it light up the blogosphere last year. Billed as an “adult version” of Twilight, I was instantly intrigued. I received the second book, Shadow of Night to review from Penguin Books, so I knew it was finally time to read (or listen to in this case) the first book.

Diana is an avid historian of alchemy and also a witch. After her parents were tragically killed when she was a child, Diana has decided to live her life as “normal” as possible to blend in with the humans. In this world, there are four types of “creatures” – Vampires, Witches, Demons, and Humans. I think it is very interesting that Demons are people that are usually frenzied and more artistically persuaded.

While at the library in Oxford, Diana comes upon a magical manuscript, Ashmole 782, and her life is forever changed. Feeling that the manuscript is magical, she quickly sends it back. It is too late however, as no one has accessed that particular manuscript in over 150 years. All creatures have sensed that she has the ability to do it and they start to watch her. One such creature is Matthew Clairmont, a handsome vampire.

Matthew is threatening to Diana at first as witches and vampires do not in general get along. Soon Diana realizes that Matthew is trying to protect her from a variety of creatures that wish to do her harm. As they grow closer, a forbidden love springs up. Will Diana and Matthew find Ashmole 782? Will they stay save from the variety of creatures that are against a mixed creature relationship? You will have to read it to find out.

I LOVED this book. It took me a bit of listening to get into it, but afterwards I was hooked and looked forward to my drive to and from work. The romance was chaste, but intense. Diana was a strong woman coming into her own and I liked it. I enjoyed the mystery and the use of history in the book. Although this wasn’t historical fiction by definition (although book 2 is), it had many references to historical events that a history buff like myself could enjoy. Diana and Matthew have a wonderful chemistry. I have to say although this book deals with very different subject matter, it reminded me a lot of one of my favorite books, Outlander by Diana Gabaldon. They both are weighty books with fascinating detail, a strong heroine, and sparks between the two main characters that you can almost see.

Overall, if you are looking for an “adult Twilight,” skip the terrible Fifty Shades of Grey and come right to this very adult book that really has nothing to do with Twilight except for staring a very sexy vampire and his love for a woman not of his species.

I listened to the audiobook version and my way to and from work and loved it. Jennifer Ikeda is a word class narrator. She has excellent voices for all of the characters and really brings them to life. I really enjoyed all of the secondary characters and she was a large part of the reason why!
Posted by Laura's Reviews at 12:49:00 PM