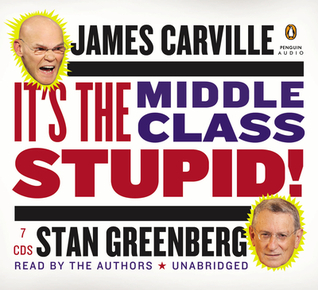 I like politics, but I was a little scared to listen to this audiobook. I wasn’t sure who James Carville and Stan Greenberg actually were to begin with and I was afraid the book would be a screaming partisan rant. Instead I found a very thoughtful debate about the current status of the middle class and what can be done to improve its lot. As I am firmly in the middle class, I was very intrigued with this premise and found myself frequently agreeing with Carville and Greenberg.

While both Carville and Greenberg were advisors to Bill Clinton and are on the liberal side of the tracks, they both found fault with both Mitt Romney and Barack Obama’s platforms. I was only annoyed a few times by a few “facts” that weren’t quite right. One quip about the state of politics in Wisconsin was wrong in which they stated that firefighters and policemen had their union rights and pensions cut. In fact, they were not cut, which is part of the debate. Only the teachers and other public workers unions were busted in Wisconsin (Democratic) while the Republican leaning Firemen and Police Unions were left intact. That is why the law was actually just struck down by a judge because it was so partisan based.

Otherwise, I enjoyed the way Carville added Southern sass to the audiobook while Greenberg had the more level headed reading. It was very interesting learning their backgrounds and entry into politics and I enjoyed their views on the middle class and how both parties need to bring the focus back on the middle class. This is a great book to listen to during a heated campaign season.