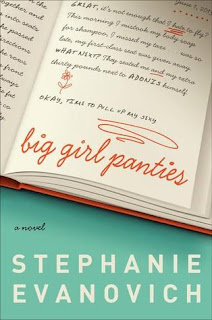 Big Girl Panties is a wonderful romantic comedy novel that exemplifies that looks can definitely be deceiving.

Holly Brennan is a 32-year old widow.  After the death of her husband Bruce, she finds herself overeating, not caring about her appearance or life in general.  On a flight back from Toronto where she had to tie up some of her late husband’s financial affairs, she finds herself in coach next to an extremely handsome man.  Logan Montgomery is a personal trainer to famous pro athletes.  He finds himself disgusted that he is in coach and next to a woman that he is not sure will fit into her seat.  After talking with her more on the flight, Logan offers his services as a personal trainer at a much lower fee than usual because of her widowhood.

Holly takes Logan up on the offer, but finds herself tormented by the closeness to such a perfect male specimen.  Logan finds himself laughing at Holly’s wit and enjoying himself when he is around her.  She does not fit his “type” of woman, which is a tall willowy blonde with breast implants.  Yet he can’t help but want to take his relationship with Holly to the next level.  Both Holly and Logan have problems with even thinking about having a relationship as they do not seem like a couple that should be together because of their physical appearances.  After an explosive fight, the two have to come to terms with themselves and each other to discover what they would like the future to hold.

I would definitely classify this as a steamy novel full of rich characters.  I read it quickly and enjoyed it.  It also had several laugh out loud moments in it.  I loved how Holly always told it like it was.  I also like that Logan was a shallow person solely focused on looks when searching for a partner and that he was attracted to Holly for her personality, almost despite himself.  It was a good read that was not your typical romance novel.

I read Big Girl Panties as part of the TLC Book Tour.  I am the last stop on this tour, but you can enjoy other reviews of this novel by checking out the full schedule here.