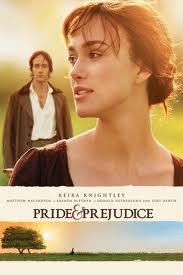 Surprisingly, with all of my Austen inspired reviews on my blog over the past six years, the only movie/mini-series version of Pride and Prejudice that I have reviewed is the series from 1980. I need to rectify that situation, and the Pride and Prejudice Bicentenary Challenge is the perfect opportunity to do it!

I recently DVR’d Pride and Prejudice 2005 and thought it was high time for me to rewatch a movie that I love. I own in on DVD, but I have gotten lazy in this digital age and prefer to watch movies on the DVR (or Netflix) where I can pause and keep the movies for later. This especially is useful as most of my movie watching time these days is while I’m folding laundry at night. As a side note, I am much saddened that only the 1980 version of Pride and Prejudice is available on Netflix. I hope the other editions become available soon. This review is of the movie as it compares to other Pride and Prejudice features and does not include a summary of the movie. Check out one of my many reviews of Pride and Prejudice over the years for a more detailed review and summary of the plot.


Whenever I was watching this version of Pride and Prejudice, my kids enjoyed it as well. I was especially amused that my five-year old son and two-year old daughter took such a shine to it. I told my husband Ben and that this will help Daniel win over the ladies when he is older and can talk about Jane Austen. By the end of the movie, I had convinced Ben that after all of these years of being married that he needs to watch Pride and Prejudice. This occurred after he argued with me for a few minutes that Elizabeth and Darcy DO NOT get married. I’m not sure how he got it so wrong, except that I can never convince him to watch it.


The Pride and Prejudice motion picture in 2005 is a beautiful movie, but it seems like Pride and Prejudice on fast forward. Many key items are so rushed, but it was necessary to make this a 2 hour movie. I much prefer one of the mini-series formats that keep the entire wonderful novel intact.

The visuals are for this version much grittier and more realistic than previous versions. There is much more of a difference between Longborn and Netherfield Park. I don’t really like this version of Longborn with pigs in the kitchen and all. It is a little too gritty to my taste and doesn’t seem the house of a gentleman to me. 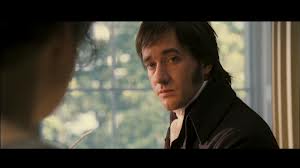 I know I will get butchered here by Matthew McFadyen fans, but he seems way too cold and can I say, awkward. Colin Firth (aka the perfect Mr. Darcy), had Mr. Darcy down pat. He was austere, but yet had a certain look in his eye that promised much more.

I like how the actors portraying the characters appear to be the correct age in this movie and not far too old as they often area. 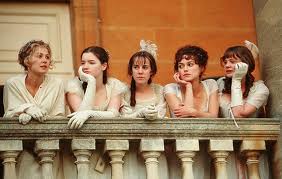 Mr. Collins as played by (Tom Hollander) is actually kind of cute and cuddly. Sure he spouts off his annoying lines, but I like him. He is not the slimy unlikeable Mr. Collins (David Bamber) in the 1995 production. He was perfect.


(Rupert Friend) as Mr. Wickham is beautiful. With such a specimen of a man, you can easily see why Lizzie and her sisters would be enchanted and willing to believe the best of him. The only downfall is that he is on the screen so little. He is introduced, gives his sad story about Mr. Darcy, and then is married to Lydia. The suspense for this part of the plot was not given enough time to develop

I love the music with this movie. Listening to it again made me realize I need to put the soundtrack on my wish list!

Overall, Pride and Prejudice from 2005 is a lush and wonderful adaptation of the classic novel. While it can’t beat a mini-series to me, it is the best movie adaptation.