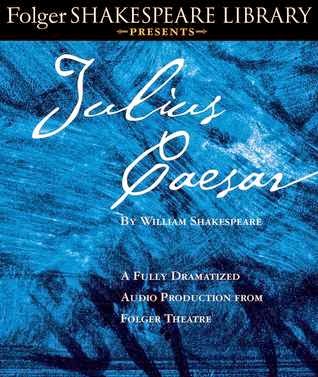 Julius Caesar is a Shakespeare play that managed to surprise me by not being about Julius Caesar’s life, but rather his assassination at the hands of his friends and fellow politicians.  I somehow missed this play in high school and college Shakespeare classes, but enjoyed listening to it on my drive to and from work.

Caesar’s friends and colleagues feel that he has become too powerful and decide to assassinate him.  Caesar receives warnings from both a soothsayer and his own wife to “Beware the Ides of March” but goes to the Senate and his death.  This assassination scene is easily the best in the play, especially Caesar’s final words when he sees his friend Brutus among the assassins, “Et tu, Bruté?”

After his assassination, the conspirators say they did it for Rome and Brutus gives a great speech.  But Mark Antony turns the tide with his famous speech,
“Friends, Romans, countrymen, lend me your ears;
I come to bury Cæsar, not to praise him.
The evil that men do lives after them;
The good is oft interred with their bones.”

There is a final battle at the end and many suicides.  This audiobook version was wonderful to listen to with a full cast performing the play, great sound effects, and music.  I enjoyed listening to it.  I did have a hard time at times following who was speaking as I was unfamiliar with the play.  I think it would work great to listen to this while reading the play.  Overall this is a great production of a great play.
Posted by Laura's Reviews at 10:21:00 AM