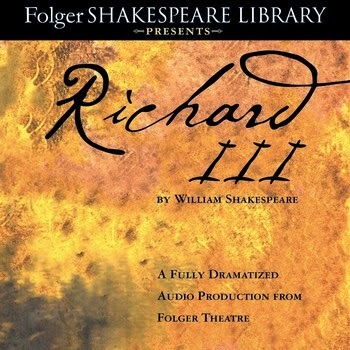 I have never read or watched Richard III by William Shakespeare, but I love to read historical fiction set in this time period.  I was very happy to have the opportunity to review this audiobook.

Richard III is the full cast full length dramatic reading of the Shakespeare play.  This makes it very entertaining with each part read by a different actor complete with sound effects and music between each scene. What I discovered while listening to this audiobook is that Shakespeare painted a very dark picture of Richard III.  He is a Machiavellian character that works his way through the play to complete evil.  Shakespeare also condenses the timeline greatly.  Years pass by very quickly from Edward IV’s reign, death, Richard’s marriage, rise, and end all in a three hour play.

Overall, I enjoyed listening to Richard III.  It was a great audiobook production.  I found myself interested by the play, but it was not one of my favorite Shakespeare plays.  I think the problem for me is that I am such a great fan of the time period.  I think that Shakespeare painted Richard III was a one dimensional character that was only evil, and failed to capture the true nuances of whether Richard III was good or evil.  It was more an exaggeration of the real historical figure.

I loved hearing my two favorite quotes in this play:
“Now is the winter of our discontent
Made glorious summer by this sun of York;
And all the clouds that lour'd upon our house
In the deep bosom of the ocean buried.”

A horse! a horse! my kingdom for a horse!