The Corinthian by Georgette Heyer 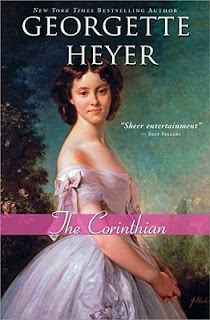 Georgette Heyer novels are comic regency gold.  When I read one of her novels, I feel like I am reading a 1930’s movie with the witty dialogue between lead characters set in the Regency Period.  If you’ve read all of Jane Austen’s novels and you are looking for something more, I highly recommend Georgette Heyer.  Her novels are historically accurate and well researched for the Regency period and the characters are always fantastic.

Sir Richard Wyndham is a fashionable nobleman during the regency period, thus a Corinthian.  He is being pressured into making an offer of marriage to a young woman of his acquaintance.  Unfortunately she comes from a family in dire circumstances and makes it clear to Sir Richard that she would only be marrying him for the money and not for love.  Sir Richard realizes that he wants something more, and that is a woman who truly loves him.

Penelope Creed is an heiress that is being forced to marry her odious cousin.  She decides to take matters into her own hands by dressing as a boy and escaping through her window.  It is during this escape that she meets up with Sir Richard Wyndham.  Sir Richard is quite drunk and agrees to help Penelope find her childhood sweetheart so they can marry. Sir Richard and Penelope are soon off on an adventure that will include mystery, comedy, and romance.

I loved this book and read it on a road trip to Marquette Michigan for a graduation party.  The witty dialogue had me laughing out loud several times during our journey.  I also though the mystery was good and it kept me guessing how it would all end.  Sir Richard and his finery were great especially when juxtaposed with his renowned prowess in the boxing ring.  I thought he was a wonderful hero and also thought that Penelope was a good accomplice, a young woman who wanted to find love on her own terms, but who had the wit and audacity to keep up with a man ten years her senior and social superior.  I also loved that the heroines name is Penelope – the same as my daughter.

I highly recommend this novel.  It was one of my favorite Heyer novels thus far, and that is saying something!

Book Source:  A birthday present from my best friend Jenn.  Thanks!
Posted by Laura's Reviews at 11:02:00 AM 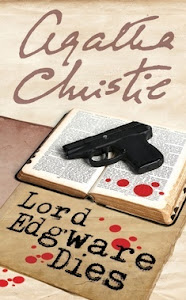