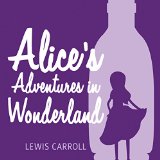 What began as an imaginative tale told to entertain three small girls on a row boat trip in 1862, three years later became a class novel written by Charles Dodgson (known mostly by his pseudonym Lewis Carroll).  Alice’s Adventures in Wonderland is a very imaginative unique tale about a young girl, Alice that falls down a rabbit hole and has many adventures in the underground world of Wonderland.

Honestly all I knew about Alice’s Adventures in Wonderland before I listened to this great audiobook was from the Disney cartoon Alice in Wonderland.  I wondered how much the two would relate and I was surprised that the Disney cartoon followed the novel very faithfully with all of the main characters involved, the white rabbit, Mad Hatter, Cheshire cat, the Queen who wants to chop everyone’s head off, etc.  I noticed the book though has more detail as one would expect and the story goes on longer in the book as well before Alice makes it back to the everyday world.

Tim Reynolds did a fantastic job as a narrator, especially as he was a narrator with a British accent.   My almost eight –year old son Daniel listened to this audiobook with me when I first started it on the way home from an event.  He really enjoyed it and the wit of the book made him laugh out loud several times.  I enjoyed the wit and just supreme silliness of it all as well.

Overall, Alice’s Adventures in Wonderland is a highly imaginative and unique story that works wonderfully well in the audiobook format, like reading the story aloud in front of a fire.  It is enjoyable for both adults and children alike.
Posted by Laura's Reviews at 7:14:00 AM