Old Chevy Truck on the Prairie: Our Journey to Visit Little House Sites by Laura Gerold 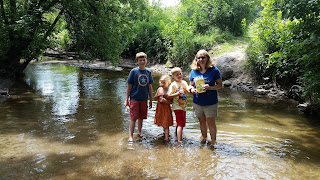 
I was just questioned on what is my favorite book of all time is.  That is always a hard question as I love so many books.  There are different genres, different moods I’m in lead to me reading different books, how can you chose?  Then I thought about how many times I’ve read and enjoyed books.  If I use that metric, The Little House on the Prairie Series reigns supreme.  It was the first set of books that really captured me as a reader and made me want to read more.  I was eight years old and my Great-Grandma Kile gave me the first four books in the series.  I promptly sat down and read all of The Little House in the Big Woods.  I read the other three books and Grandma gave me the rest of the series for Christmas.  I read them over and over again and read any books I could find about early pioneers and history.  What was also wonderful was that when I would go for my yearly one week visit to Grandma in Indiana in the summer, Grandma would read the books with me.  She especially loved the romance between Almanzo and Laura.  Now that I’m a mother, I’ve read the first four books to my boys, and have read them again now with my youngest daughter. 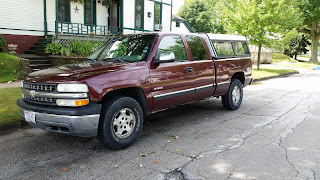 In July we were going to Minnesota for my niece’s baptism and I suddenly realized, we’ve been going to Minnesota for years to visit my husband’s family, but we’ve never done any touristy things.  Why not tag a couple of days on and actually get to see some of the Little House sites that I’ve been longing to see?  And so our adventure began with our 2000 Chevy pick-up truck pulling our new pop-up camper through the big woods of Wisconsin to the prairies of Minnesota. 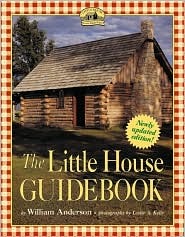 One book I’ve poured over through the years is the Little House Guide Book by William Anderson.  I’ve got a signed copy from the author from Little House Days at Heritage Hill in Green Bay.  The book details all of the Wilder sites around the country with pictures, how to get there, what is good to see, and other area attractions.  I especially liked this book as you knew what to expect at the sites.  It was a great reference for our trip. 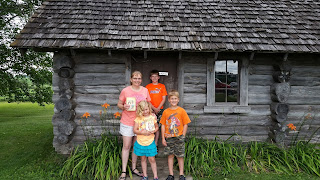 I knew from the guidebook that the Little House cabin is a rebuilt cabin and not the original.  I also knew that it was a way stop with no furniture, and sadly no big woods around it anymore, just farm fields.  Knowing what to expect was great.  We planned our trip around the fact that we would stop for a picnic lunch at the Little House in the Big Woods on our way to Walnut Grove, Minnesota.

The Little House in the Big Woods cabin had three rooms, the main room, bedroom, and pantry.  It also had an attic.  The attic was only half, like a loft.  I always envisioned it as a full attic when reading is the books.  Is the loft accurate or a nod to the TV series?  There was no information in the cabin to let you know.  I was struck by the smallness of the cabin.  A family of five lived here!  The Bedroom was small, but somehow fit them all in at night.  It was hard to visualize this! 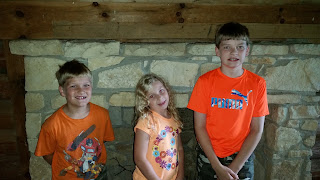 The kids in front of the fireplace inside the cabin.

There was no furniture in the cabin, except for a table and a wall of interesting information. Outside there was a covered small picnic area where we ate lunch.  There was also a historical sign and an outhouse with pit toilets to use.  There was no handle on the pump of fresh water.  The area directly around the cabin was all rolling hills and fields.  The kids kept saying, “Where are the big woods??”  I found it very peaceful and interesting.  I was excited to finally see it after wanting to see it since I was eight years old.  What surprised me is that I didn’t realize how rolling the area would be.  I can see why Pa wanted to move.  Besides the many trees he had to clear, there wasn’t much farmable area with the rolling hills. 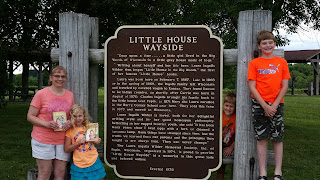 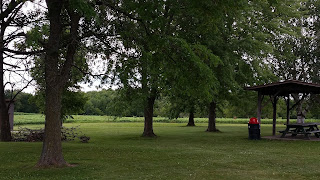 After we ate lunch, we drove into Pepin.  It’s a cute town on Lake Pepin.  Lake Pepin is really a wide area of the Mississippi River.  We drove north to take the bridge across to Redwing, Minnesota.  We passed Maiden Rock – a stunningly beautiful rock overlooking the Mississippi and the town that shares its name is attractive and quant.  The name Maiden Rocks if rom the legend of an Indian Maiden who leapt to her death from the rock rather than marry someone she didn’t love.

On the Banks of Plum Creek
We continued our voyage to the wonderful small, but hidden City of Sanborn Park in Minnesota. We camped there and loved it.  It is quiet with a nice playground and plenty of green space.  One can tell the town takes pride in this park as well they should.

Sod House on the Prairie
Our first stop the next morning was the Sod House on the Prairie.  We talked to the friendly owner who told us how her husband built the sod houses as a passion project.  My kids were enthralled with the barn cats and kittens.  My son Kile said that was the best part!  The first stop on the site is a video laying from the history channel visit to the area where the owner explained how he built the sod houses.  The sod houses included one large house, a dugout, outhouse, and shed as well as the cutter used to make them.  There was a log cabin that was also the size of the Ingalls family dugout on Plum Creek in Walnut Grove.  It was very small!!  It made the Little House in the Big Woods look like a mansion.  I can see why Pa was ready to take out a loan on the wheat crop to build a frame house after one winter living in the sod house. 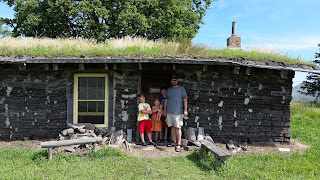 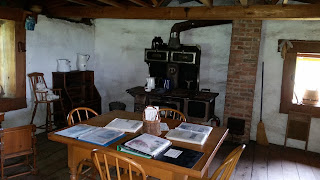 Inside the deluxe sod house 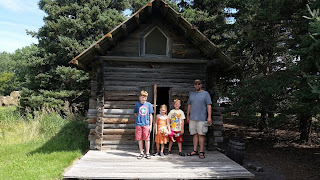 Frame House the Size of the Ingalls Dugout
The buildings were furnished and of much interest to the kids.  They were “much nicer than I imagined,” said my husband Ben.  There was a restored prairie around the site with paths to walk.  The sod houses are starting to return to nature since the owner’s illness.  It’s easy to see why it’s hard to find any original sod houses.  Overall Sod House on the Prairie helped me to understand what it was really like for the Ingalls to live in a sod house. 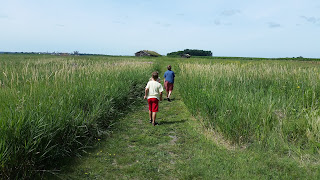 Restored Prairie
Original Dugout Site
The original dugout site for On the Banks of Plum Creek is a family farm.  It is $5 for carload.  There were two picnic tables on the site where we enjoyed a picnic lunch.  The DNR has restored prairies around the site.  We walked on a couple of loops.  Penelope and I are currently reading on the Banks of Plum Creek and it was amazing to see some of the same vegetation on the prairie that we had just read about. 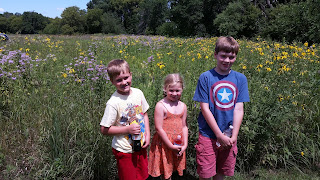 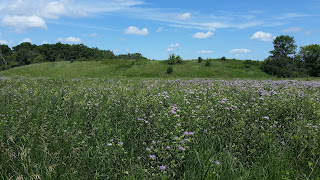 Restored Prairie around the site 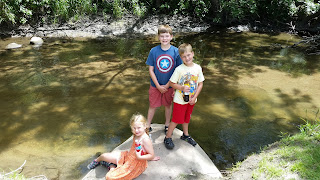 The Big Rock Laura and Mary Played On

The big rock from the book that Laura and Mary played on is now in the creek.  The dugout itself is not there, but there is an outline topped off.  It was smaller than I imagined and also farther away from Plum Creek than the illustration in the book by Garth Williams. 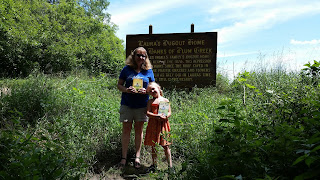 Original Dugout Site
The bridge was one plank over the Creek in the book, I’ll admit, I was disappointed by the new bridge – although I’m sure it was much safer!  The kids LOVED wading in the creek and would have stayed there all day.  “It was good,” said ten year old Kile.  “I liked going on a Creek adventure,” said Daniel.  It was awesome to walk where the Ingalls family had walked.

Laura Ingalls Wilder Museum
The kids really enjoyed all of the hands on activities for kids at this small museum.  It also had a great gift shop where I bought a few items.  I was overwhelmed by the selection and wanted so much more than I purchased, but there are budgets!  The museum had a lot of TV show memorabilia, but not many book artifacts.  There were mostly pictures of the historical artifacts of replicas of what is in the museum in Laura’s final home in Mansfield, Missouri. Kile liked pretending to be a teacher in the museum

I’ll admit that my favorite part of the museum was a weird sock and some panty hose that were displayed that Alison Arngrim, the actress who played Nellie Oleson on the show, had worn on two different visits to the museum.   I thought this was very strange.  Did the museum scavenge them out of her dressing room?  Did she leave them on purpose?  Who wants to see a dirty sock warn by the actress who played Nellie Oleson?  I’m a Little House super fan, but this was taking it too far! 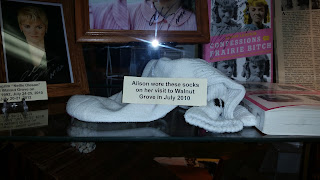 Am I the only one weirded out by the socks?

We drove around town after the museum and I was sad that no original buildings from the book remain.  They did have historical markers on the sites where they stood.

Laura Ingalls Wilder Pageant
A Pageant is held in Walnut Grove on three weekends in July.  This was easily our favorite part of the entire trip.  The pageant was an outdoor play of the events of On the Banks of Plum Creek with some items updated for historical accuracy.  The sets were awesome.  We especially liked when they built a church in the play and physically built it before us.  Other sets, such as houses, came out and unfolded to be used in the story line.  The storyline was great and the actors were also wonderful.  It is the same pageant storyline every year and you can tell it has been polished over time. 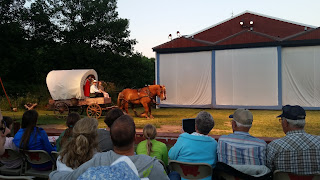 We all loved the Pageant and it was much better than we expect.  “It was a high quality production,” said my husband Ben.  Our only complaint is that we should have brought pants or blankets!

That concluded our trip to Walnut Grove.  We left the next morning to drive to Minneapolis for the baptism.  We were all happy we made the trip and we are hoping to go to South Dakota next year to see our next Little House site, De Smet as well as the badlands and Mount Rushmore.  This trip really helped me to see what the world was like in Little House in the Big Woods and On the Banks of Plum Creek and reality did not always match what I had imagined!

Have you been to any literary sites?  How did they match up with your imagination?
Posted by Laura's Reviews at 6:11:00 PM