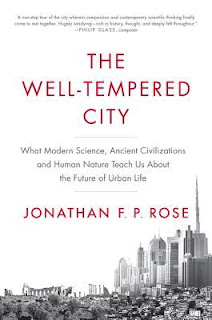 I love the subtitle of this book, “What Modern Science, Ancient Civilizations and Human Nature Teach Us About the Future of Urban Life.”  As an environmental engineer, I am fascinated on the topic of infrastructure.  A little over ten years ago, I took a fascinating urban planning class at Marquette University in Milwaukee.  It really got me thinking about the way we build and maintain cities.  I also realized I am a “new urbanist” and prefer to live in an old house in the city and fix it up rather than to contribute the urban sprawl.  Try explaining this to my family who seem to think the only sign of success is building your own new house on a one acre plot in the country!  I also worked a lot at my previous job in the area of low impact development.  How can we develop our cities smarter using less concrete to make sure that water can infiltrate into the soil and build back into our groundwater supplies?

I was intrigued with the Well-Tempered City as it is authored by a premier urban planner and promised to take a look at the past to come up with innovative designs for the city of the future.  Rose argues that the five qualities of a well-tempered city are coherence, circularity, resilience, community, and compassion. The book is broke up into five parts to delve dep into the five qualities of the well-tempered city. The book is set up in chapters with many interesting subsections within each chapter.

I must admit that I found Rose’s prose at times to be a bit pretentious, especially at the start of the book.  He spent the intro waxing on about Bach and his way to tune instruments and how that relates to urban planning. I am a fan of Bach, but the engineer within me just wanted him to get on with his book.  Once he got into the fascinating history of mankind and city building through the millennia, I was hooked.

My background is water resources and I’ve actually given many presentations on my designs of low impact development areas in the mid-west.  This is basically the natural infrastructure section of this book and pretty much part II, resilience.  Rose did a great job of tying this to climate change and how green infrastructure is really the way the country needs to move forward.  I also loved how the book had an entire chapter about how water is a terrible thing to waste.  This book had a great discussion about wastewater treatment and also water quality overall.  A lot of this material I currently teach in my environmental engineering technology program, but there were a lot of great facts sprinkled throughout that I could use to enhance my presentations.  I already used some of the facts this week in class and there are a lot more that I can use in the future.

Overall, I found The Well-Tempered City to be an intriguing look at urban planning the past with a path set forward.  As an environmental engineer in education, it included a lot of great environmental information which I love to see as a major part of how to build the cities of the future.  Clean water and green infrastructure are the passions of my life and I’m glad to see them getting included in urban planning on a wider scope.  As an educator, the book has a lot of great points that I can refer to in class.  I always love to recommend relevant books to my students!

“Healthy cities must have both strong, adaptable governance and a culture of collective responsibility and compassion.”

“In a time of increasing volatility, complexity, and ambiguity, the well-tempered city has systems that can help it evolve toward a more even temperament, one that balances prosperity and well-being with efficiency and equality in ways that continually restore the city’s social and natural capital.”

“When the purpose of our cities if to compose wholeness, aligning humans and nature, with compassion permeating its entire entwined system, then its ways will be ways of love and all its path will be paths of peace.”

What would you like to see in a city of the future?

Book Source:  Review Copy as a part of the TLC Book Tours

About The Well-Tempered City

• Hardcover: 480 pages • Publisher: Harper Wave (September 13, 2016) In the vein of Jane Jacobs’s The Death and Life of Great American Cities and Edward Glaeser’s Triumph of the City, Jonathan F. P. Rose—a visionary in urban development and renewal—champions the role of cities in addressing the environmental, economic, and social challenges of the twenty-first century. Cities are birthplaces of civilization; centers of culture, trade, and progress; cauldrons of opportunity—and by 2080 will be home to 80 percent of the world’s population. As the twenty-first century progresses, metropolitan areas will bear the brunt of global megatrends such as climate change, natural resource depletion, population growth, income inequality, mass migration, and education and health disparity, among many others. In The Well-Tempered City, Jonathan F. P. Rose—the man who “repairs the fabric of cities”—distills a lifetime of interdisciplinary research and firsthand experience into a five-pronged model for designing and reshaping cities with the goal of equalizing their landscape of opportunity. Drawing from the musical concept of “temperament,” Rose argues that well-tempered cities can be infused with systems that bend the arc of their development toward equality, resilience, adaptability, and well-being, to achieve ever-unfolding harmony between civilization and nature. While these goals may never be fully attained, if we at least aspire to them, and approach every plan and constructive step with this intention, our cities will be richer and happier. A celebration of the city and an impassioned argument for its role in addressing important issues in these volatile times, The Well-Tempered City is a well-reasoned, hopeful blueprint for a thriving metropolis—and the future. 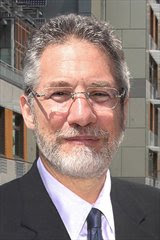 JONATHAN F. P. ROSE works with cities and not-for-profits to plan and build affordable and mixed-income housing and cultural, health, and educational centers. Recognized for creating communities that literally heal both residents and neighborhoods, Rose is one of the nation’s leading thinkers on the integration of environmental, social, and economic solutions to issues facing cities today. For his work as founder of the investment, development, and urban planning firm Jonathan Rose Companies, he has received awards from the Urban Land Institute, the American Institute of Architects, the American Planning Association, and the National Trust for Historic Preservation, among many others. With Diana Calthorpe Rose, he is cofounder of the Garrison Institute and the creator of its Climate Mind and Behavior program. Find out more about Rose and The Well-Tempered City at www.welltemperedcity.com
Posted by Laura's Reviews at 7:04:00 PM