I'm happy to have one of my favorite authors, Monica Fairview on my blog today.  Read ahead for a tantalizing excerpt from her new novel, Mr. Darcy's Pride and Joy and leave a comment for an opportunity to win an e-book of one of her Darcy novels. 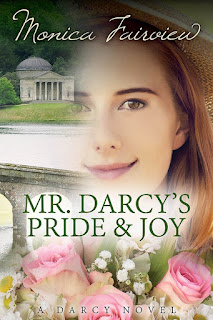 I’m delighted to be once again visiting Laura’s Reviews. I have such a strong admiration for bloggers like Laura who have managed to sustain their blogs over a long period of time. It’s unbelievable that the blog has been going since 2007! In fact, that was before I’d even written my first novel.

This time, the occasion for my visit is the blog tour for the release of Mr. Darcy’s Pride and Joy.

This excerpt is from Chapter Nine. I hope you enjoy it!

***
When Elizabeth returned from her long walk, her clothes were soaked through, and her petticoats encased in mud. The rain had poured down in buckets and the wind had whipped her hair into a frenzy, but the stormy weather reflected her spirits and she felt invigorated by it, even if it had not changed her mood. She ran upstairs quickly, knowing her mother would chastise her for getting wet. She changed quickly into a day dress and came slowly down the stairs, rubbing her hair dry with a towel.

“You will never guess who was here,” said Kitty, as Elizabeth came into the parlor, bursting to tell the news.

Kitty, realizing she had not succeeding in arousing her sister’s curiosity, blurted out the information. “It was Mr. Darcy! Aren’t you surprised, Lizzy?”

“Mr. Darcy was here?” said Elizabeth, dropping the towel, hope arising inside her like sunshine after a storm.

“Yes,” said Kitty, very pleased at her sister’s reaction, “and he stalked off in his usual arrogant way, stiff as a poker.” She rose and marched around the room in imitation. Mrs. Bennet, who was just entering the room, laughed, and Mary sniffed.

“How long ago was that?” said Elizabeth.

“What does it matter?” said Mrs. Bennet. “I care nothing for him. I cannot imagine why he keeps showing up like a bad penny.”

“What concern is it of yours? What do you have anything to do with Mr. Darcy? If you must know, he left about an hour ago, which you would have known if you were not off somewhere, wandering the Lord knows where.”

“Is he staying in Meryton?” said Elizabeth, ignoring her mother’s comments.

Elizabeth knew she would learn nothing more from her mother, who had taken such a dislike to Mr. Darcy that not even his assistance in Brighton had changed her mind. Only her father could give her more information. Her heart was beating with anxiety. If Mr. Darcy had come all the way to Longbourn to speak to her father and not stayed to see her, it did not bode well. Something bad had happened. Elizabeth did not delay. She marched quickly to the library and knocked at the door, entering before her father had a chance to answer.

“Did you turn Mr. Darcy down?” she said, without preamble.

Her father took off his spectacles with deliberation and peered at her over his book.

“If you are asking if Mr. Darcy asked for your hand, then the answer is yes.”

“I am asking if you refused him.”

It was as she had feared. She closed her eyes and tried not to imagine the look on Darcy’s face when it had happened. It was hard not to see it, having already witnessed his dejection on two occasions. Her heart went out to him.

“Oh, how could you?” she said, her eyes full of pained accusation. “I never thought you could possibly be serious. Why are you so against this match, papa? Do you not see that you are destroying my happiness?”

Her father looked away.

“Is Mr. Darcy staying at the inn in Meryton or at Netherfield?”

Mr. Bennet sighed. “At the inn, child. I suppose there is no point in asking you not to make a spectacle of yourself—?”
***

Mr. Darcy and Elizabeth Bennet are engaged at last, and Mr. Darcy is preparing to take out a special license to get married quickly. But, just when everything seems to be going just right, he encounters opposition from an unexpected quarter. Then, when his engagement is announced – to someone else – Elizabeth, understandably, begins to doubt his sincerity.

Perhaps their love is doomed after all…

Find out more in this third part of the Darcy Novels series.

Monica Fairview is a long-time admirer of Jane Austen's wit. She loves to laugh, and she is convinced that her cats can understand everything she says. She is the author of several Austenesque novels: two traditional Jane Austen sequels, one post-apocalyptic tongue-in-cheek Jane Austen spin-off, one multi-author novel THE DARCY BROTHERS, featuring Mr. Darcy’s rakish brother Theo, and now the trilogy, THE DARCY NOVELS. She has also written a Regency Christmas novel, A VERY MERRY CHASE, which was published as part of The Regency Quintet anthology and will be coming out soon on Amazon.

Monica Fairview’s real claim to fame is that she lived in Elizabeth Gaskell’s house in Manchester as a teenager, in the days when it was faded and neglected, so you could say she has the smog of NORTH & SOUTH in her blood.
Monica lived in the USA for many years, where she taught literature to captive victims. She has lived in Illinois, Texas, Colorado, California, Washington State, Oregon, and Massachusetts. By some quirk of fate, she now lives in Surrey within the Greater London area, within a stone's throw of Jane Austen's picnic spot in EMMA, Box Hill. She loves visiting historical properties when it isn’t raining.

As part of your comment, you must include an email address. If I can't find a way to contact you I will draw another winner.
For an additional entry, blog about this giveaway or post it on your sidebar. Provide a link to this post in your comment.
I will be using random.org (or a Monte Carlo simulation in excel) to pick the winners from the comments.
This contest is only open to addresses in the United States
The deadline for entry is midnight on Friday September 23rd!
Please make sure to check the week of September 26th to see if you are a winner. I send emails to the winner, but lately I've been put in their "junk mail" folder instead of their inbox.
Good luck!