Darcy’s Hope: Beauty from Ashes by Ginger Monette (and GIVEAWAY!) 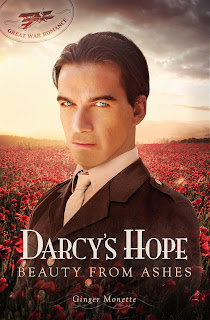 Pride and Prejudice, WWI, Downton Abbey – these are three of my favorite things and make for a winning combination.  Darcy’s Hope:  Beauty from Ashes includes these three elements as it tells a Pride and Prejudice variation set during WWI.

Captain Fitzwilliam Darcy has requisitioned the dower house at Longbourn manor for the military during WWI and in doing so promised Elizabeth Bennet’s father that he would take care of her if anything happened to Mr. Bennet.  After Mr. Bennet’s untimely death, Captain Darcy proposes to Elizabeth only to be turned down. After Mrs. Bennet turns to madness and Longbourn goes down in flames, Elizabeth and Jane become nursing assistants, VADs, and are sent to France.

Elizabeth wants to become a doctor and take care of herself, but working in a bloody field hospital, gives her pause.  Darcy arrives at the field hospital she is working to take over the general management of the hospital, but also to look for undercover agents that could be linked to the despicable Lieutenant Wickham.  Is Elizabeth part of the plot?  Can Darcy keep his emotions reined in throughout the turmoil of war?

I greatly enjoyed this novel.  One of my favorite parts of the novel was the mention of other great characters.  For example, John Thornton, mill owner and hero of Elizabeth Gaskell’s North and South shows up as a batman for Captain Darcy and helps him to understand that class boundaries don’t define people.  “He had maintained a comfortable distance from his men over their months in the trenches, but remaining aloof from Thornton had been a challenge.  Despite the mill owner being a man of trade, Darcy liked him.  Both possessed a reserved temperament and generally preferred books to crowds.”

Captain Darcy also meets Robert Knightley, the descendent of George and Emma Knightley of Jane Austen’s novel Emma.  He like Matthew Crawley of Downton Abbey, has inherited Donwell Abbey after the male heirs died away.  He has a problem as a doctor trying to fit into the life of a gentleman.  I loved his story and hope to see more of him in the follow up book, Darcy’s Hope:  At Donwell Abbey.

I enjoyed that author Ginger Monette really seemed to do her research on WWI and incorporated a lot of intriguing details throughout the story.  I also enjoyed that this variation was set after most of the events of the original story so it was more of an add-on to the story.  What if Elizabeth refused Darcy, but never received his letter?  I also liked that the novel really showed Darcy’s changing attitudes as well as his pain from being on the front in the Somme.  I will admit thought that I was dismayed by the ending as I really want to know what is going to happen next?  Who is behind the espionage?  What does Wickham’s cryptic message mean?

“Though she despised the man, she now needed him.  Life had a cruel way of mocking her fate.”

“He startled, stunned as if struck by a bolt of lightning.  All men were the same – equal in the sense that they all had two arms and two legs.  What truly differentiated one man from another was opportunity and character.  The rest were merely superficial presentations – like money and manners.”

“But war had a way of changing things.  Sometimes beauty rose from ashes.”

Overall, Darcy’s Hope: Beauty from Ashes was an engaging historical fiction story and intriguing Pride and Prejudice variation.  I look forward to the next chapter in this saga.

For more on Darcy's Hope:  Beauty from Ashes, read an interview with author Ginger Monette at this link. 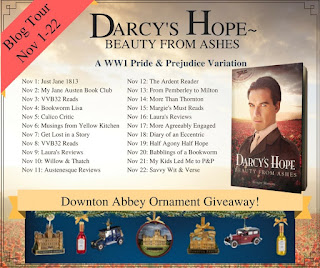 a Rafflecopter giveaway
Posted by Laura's Reviews at 6:05:00 PM