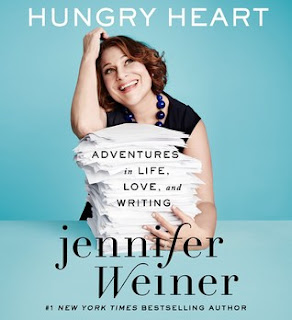 Hungry Heart is the memoir of one of my favorite authors Jennifer Weiner.  In this memoir, Weiner described her childhood, her start as an author, and finding happiness as an adult.  I had many thoughts as I listened to this audiobook which are outlined below.

I really enjoy that Jennifer Weiner narrates her story herself.  I’ve been a fan of Weiner for over a decade and used to love to follow her blog writings.  It gives the story a great emotional impact knowing it is the author herself reading.

I love that Weiner’s parents came from Michigan, my home state.  Hearing of her travels to Michigan as a kid were both familiar and exotic as the eastern side of the lower peninsula is a mystery to me.  My family firmly stayed in Southwest Michigan except for occasional travels north.

Weiner’s Jewish background always fascinates me.  In the past few years I’ve learned of not one, not two, but three secret Jewish ancestors of my own that passed in the late 19th century and early 20th century in rural Indiana and Ohio and married Christian men.  I always wonder what it felt like for them to be cut off from their culture.

Weiner’s loneliness as a child and teen in this book is heart wrenching.  Being a heavier, big nosed, smart kid myself, I could relate to a lot of what she is writing about, especially being only eight years younger.  One positive thing I did have going for me is that I had an excellent group of friends through my K-12 experience.  I may have gotten picked on, but I wasn’t alone.  I wanted to give Weiner a hug at times, but other times I was kind of scared of her.  As she stated in the book, she may have been the Liz Lemon of high school that complains about getting picked on, but she was actually the mean girl.  Some of the snarky comments she made in Hungry Heart about people were really mean.  It made it hard to feel sympathy for someone who could turn around and be so viscous to other people.  It made me uncomfortable reading what she said about other people (making fun so someone who couldn’t read aloud well, other people’s weight, breath, unfortunate looks).

I enjoyed that Weiner included some of her early stories, especially the story about her sister Molly and their visit to their Nana in Florida.  It seemed like an early precursor to one of my favorite books of Weiner’s, In Her Shoes.

Hungry Heart also included a great discussion of motherhood and how too much is expected from a mother.  I loved her mother’s advice to just do good enough.

Weiner talks at length about the struggle to try to be skinny.  I know that struggle as I am the “fat” one in a family that likes to talk excessively about weight and looks.  I had a Grandpa that rated all of his Granddaughters on their looks, and I was rated second from the bottom.  I enjoyed and empathized with Weiner’s thoughts on the weight struggle, but I grew a bit angry when Weiner would downplay other’s problems.  One thing that struck a chord with me was one she downplayed someone with acne problems and said they “could just take Accutane,” but that fat is forever.  I thought her lack of empathy was very disconcerting especially in someone trying to elicit sympathy for a weight problem.  When I was in college, my normal acne turned into cystic acne.  I took Accutane and it did not solve the problem.  I am 38 and I still have to use medication for adult acne.  My skin will never look quite right and I had to endure all sorts of insensitive comments from people sure that I didn’t take care of my skin.  Little did they knew I was washing it using all sorts of medication and even changing my pillow case every night to solve the problem that I couldn’t solve.  To put your weight problem at the forefront and deny that other people with problems such as acne may have problems too is highly insensitive and makes it hard for me to commiserate on the weight problem.  Weiner also had the problem that she was very thin skinned about her weight, but made really snarky remarks about a lot of other people and their looks throughout the novel.  I was confused by this.  I don’t make fun of other people’s looks just like I would hope they won’t make fun of mine.  None of us are perfect, but we can always try to treat each other the way we would like to be treated.

The first half of the book was a memoir, then it veered into vignettes or essays including one called “The F Word” that I had read previously.  It didn’t quite fit into the book as a whole as it contained repeats from other chapters.  It should have maybe had a snippet in it saying it was a previously published work.  The worst part of the book for me was an ENTIRE CD of Weiner’s tweets.  If I wanted to read her tweets, I would look at twitter.  It was so random and strange, especially as most of them were about a show I hate, the Bachelor.  A lot of the ladies in my book club also watch The Bachelor, but I am confused on how a self-proclaimed feminist can watch it.  The bits I’ve watched are horrifyingly sexist.  That was a lot of the trouble I had with this memoir, Weiner proclaimed to be a feminist and above looks, but then has a great love for beauty pageants, The Bachelor, and snarky comments about other peoples’ looks.  It seemed very hypocritical to me.  I also didn’t enjoy the “tweet” noise on the CD between all of the tweets.  I wanted to rip the CD out of the player and throw it out the window.

I enjoyed the section on the making of one of my favorite movies, In Her Shoes.  It was interesting to hear how the book was shaped and how the movie was put together from the author’s prospective.  I only wish more of Weiner’s books were made into movies.

The book veered back into being good again toward the end when Weiner talked candidly about her miscarriage.  I had tears running down my cheeks as I listened.  It also plumbed emotionally depths talking about her estranged father’s death.

I started this memoir thinking Weiner would be a great friend, but I finished it unsure.  Would Weiner be the friend who says candid things that I appreciate, or the one that complains about her weight, but then talks about my looks behind my back?  Maybe.

Overall, Hungry Heart was a fascinating and relatable autobiography that had a strong start and finish, but suffered greatly in the middle with tweets and a load of hypocrisy.  After finishing this a couple of weeks ago, I’ve had time to think about it and I find myself only thinking about the good parts.  I really was struck by her story growing up and especially her miscarriage and father’s death at the end.  It makes this a good book, what would have made it a great autobiography would have had a heavier editor’s hand in the middle.
Posted by Laura's Reviews at 4:50:00 PM