Road to Paradise by Paullina Simons 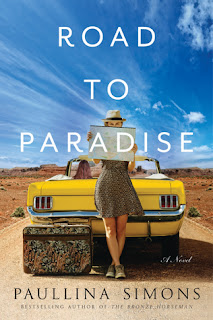 Shelby Sloane has received the best present a graduating high school senior in 1981 could receive – a 1966 yellow Shelby Mustang.  She has lived a sad life wondering what had happened to her mother after she was abandoned as a child.  She decides to take the yellow Mustang on a road trip west after graduation to California to try to find her Mom.  Her ex-best friend Gina finds out about the road trip and asks to tag along to meet her boyfriend in California.  Shelby has everything meticulously planned and doesn’t really want a companion until she realizes that Gina will pay half of the bill.  They start on their road trip and things immediately go from bad to worse.  Gina’s family has stops set up all along the route that are out of the way and include the two carting dogs around the country.  Shelby also picks up a hitchhiker which is expressly against everything their families had told them before leaving and against the rules that Gina and Shelby have made together.

The girl they pick up, Candy Cane, is mysterious, troubled and also wants a ride to California.  When the girls discover that there is a threatening man after Candy Cane, they decide to take her with them.  Will they make it to California?  What is the secret behind Candy Cane and what happened to Shelby’s mother?

I was very interested in reading this novel as I’ve heard a lot of great things about Paullina Simons, in particular, The Bronze Horseman.  I’ll admit I was disappointed by this book.  The writing was excellent, but I found I didn’t really like the characters and it felt like their story was never ending with not much movement.  Once they got on the road and picked up Candy Cane, the story seemed to be constant fighting about whether to keep Candy in the car or not and a very long journey on 2-lane highways across the country to avoid pursuit.  I felt the ending was a letdown as well.  I don’t want to give more details as I don’t want to ruin the story for others, but I felt there were no surprises and the characters were not compelling enough for me to care about their story.

“But there is another road in Nevada that takes you almost there:  U.S. 50, the loneliest road in America.”

“I was young, that’s what the young are supposed to do, not think about much, not thing about consequences, and so I hadn’t.”

“You know what I have been thinking traveling with you through every mile of this country?  What if there is no place in the world for me?”

Overall, Road to Paradise is a road trip and coming of age story that had good writing, but characters that I did not find compelling.

About Road to Paradise

� Paperback: 544 pages � Publisher: William Morrow Paperbacks (November 29, 2016) Love, passion, and friendship collide on the road trip of a lifetime in this breathtaking novel from Paullina Simons, internationally bestselling author of The Bronze Horseman and Tully. There�s no telling where a journey will lead you� Shelby Sloane has big plans for the summer of 1981. She�ll drive cross country in her graduation present�a classic yellow Mustang. In California, she hopes to find the mother who left her behind long ago, and then return East in time to start college. Her childhood friend Gina is desperate to reunite with her boyfriend in Bakersfield and has convinced Shelby to bring her along. With Gina on board, Shelby�s carefully mapped-out itinerary is quickly abandoned. Soon, so is their �no hitchhikers� rule when Shelby picks up a mysterious girl named Candy Cane, who sets them all on a new and dangerous course. Streetwise beyond her years and decked out with tattoos, piercings, and spiky hair, Candy is on the run from a past darker than anything the two suburban girls have ever known. Candy draws Shelby and Gina into her terrifying world, where life as they know it is turned upside down and there is no place left to hide.

Paullina Simons is an internationally bestselling author whose novels include Bellagrand and The Bronze Horseman was born in Leningrad in 1963. As a child she immigrated to Queens, New York, and attended colleges in Long Island. Then she moved to England and attended Essex University, before returning to America. She lives in New York with her husband and children. Find out more about Paullina at her website, follow her on�Twitter, and connect with her on Facebook.
Posted by Laura's Reviews at 3:53:00 PM