So Big by Edna Ferber 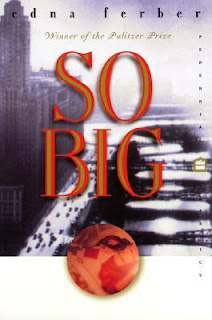 What does it mean to be a successful person?  What is the price of success?  Can we help our children too much on their way to success?  All of these topics and more are found in Edna Ferber’s Pulitzer Prize winning novel, So Big.  So Big chronicles the life of Selina Peake and her son, “So Big” Dirk DeJong.  The daughter of a gambler, Selina finds herself alone at her father’s sudden death with no way to support herself.  She decides to become a teacher in the outskirts of Chicago within a Dutch community of vegetable farmers.  She tries to find the beauty in her situation and soon finds herself in love.  Will Selina be able to find her way in her new setting?  How will her choices effect the life of her son?

I picked So Big for my January book club pick for the FLICKS (Rogue) Book and Movie Club.  I have wanted to read So Big for quite some time after I learned that author Edna Ferber was born in Kalamazoo Michigan (where I was born) and grew up in Appleton Wisconsin (not far from where I live now).  She wrote many best sellers that were made into movie favorites such as Showboat, Cimarron, and Giant.  When I discovered she wrote the Pulitzer Prize winner novel of 1925, I was stunned.  Why had I not heard of this author who was writing in the Jazz age at the same time as F. Scott Fitzgerald?

I still cannot answer that question after reading So Big.  I thought it was an excellent novel that while it started in the past, it lead up to the Jazz age and was a perfect picture of what was going on in the time.  It had a lot of deep questions to think about.  Does being a bonds tradesman and making lots of money make you a successful person?  Or does enjoying life and trying to make a good living, but focusing on the beautiful?  Also, what happens to the children of the successful tycoons of the Gilded Age who didn’t have to strive for their success as their forbearers did?  I found that the messages that were in this book were as relevant today as they were back in the 1920’s.  It provided great discussion at our book club, although sadly only one other member read it besides myself.  Why is this book and Edna Ferber not part of the literary canon?  I feel that successful female authors are often left out in the past as well as today.  In her biography in the back of this edition it said in her New York Times obituary that “She was among the best-read novelist in the nation, and critics of the 1920s and ’30’s did not hesitate to call her the greatest American woman novelist of her day.”

So Big reminded me a bit of The Magnificent Ambersons by Booth Tarkington which I read in a different book club in Milwaukee over ten years ago.  Both dealt with the American dream and how families deal with it through the generations, although I thought So Big did a better job.

I enjoyed the characters in this novel, but in particular Selina.  I also love how she mentored young Roelf Pool and allowed him to think beyond his hardscrabble existence as a farmer’s son.  I also loved that she always thought of the positive and how things could be improved.  She was dealt a bad hand at life more than once, but she was able to use her own ingenuity to rise above it all.  It was a good feminist story.

The story skipped around some and foreshadowed events, but I enjoyed the style of writing and her great descriptions.  I also loved that Sobig gets his nickname from the question you ask, “How Big is Baby,” “So Big!”  It was interesting that one book club member had never heard of this!

As an instructor I was intrigued when Sobig is in college and there are students that are “classified” or traditional students and “unclassified” or returning adults.  The unclassified have saved their entire adult life to finally go to college and achieve their dreams, but they are shunned by both the college and traditional students who have parents to pay for their college.  I thought it was interesting that you could raise some hogs to pay for college back in this day.  If only it were true now!

I loved the setting and seeing Chicago change through time.  I particular loved learning about the vegetable farmer industry and how it grew up to supply the needs of the city and what hard work it was getting it to the city to sell.

Some of my favorite quotes:

“But he sulked and glowered portentously and refused to answer, though her tone, when she called him So Big, would have melted the heard of any but that natural savage, a boy of ten.”  As a mother of a ten year old- this gave me a chuckle!

“Selina was to learn that the farm woman, in articulate through lack of companionship, becomes a torrent of talk when opportunity presents itself.”

Aug Hempel – “I’m out in the yards every day, in and out of the cattle pens, talking to the drovers and the herders, mixing in with the buyers.  I can tell the weight of a hog and what he’s worth just by the look at him, and a steer, too.  My son-in-law Michael Arnold sits up in the office all day in our plant, dictating letters.  His clothes they never stink of the pens like mine do .  . . Now I ain’t saying anything against him, Julie.  But I bet my grandson Eugene, if he comes into the business at all when he grows up won’t go within smelling distance of the yards.  His office I bet will be in a new office building on, say Madison Street, with a view of the lake.  Life!  You’ll be hoggin’ it all yourself and not know it.”  This was one of my favorite quotes in the book.  Aug Hempel is the father of Selina’s best friend Julie.  He was a butcher and then later became a meat packing baron.  He was disturbed that through his hard work, the next generations grow more distant from the actual work that brought them their success and maybe of enjoying life to its fullest.

Dirk – “I like it well enough, only – well, you see we leave the university architectural course thinking we’re all going to be Stanford Whites or Cass Gilberts, tossing of a Woolworth building and making yourself famous overnight.  I’ve spent all yesterday and today planning how to work space of toilets on every floor of the new office building, six stories high and shaped like a dry goods box, that’s going up on the corner of Milwaukee Avenue and Ashland, west.” – I think this is the ban of every beginning architect.

“He might have lived a thousand miles away for all he knew of the rest of Chicago – the might, roaring, swelter, pushing, screaming, and magnificent hideous steel giant that was Chicago.”

“Neat little pamphlets are written for women on the subjects of saving, investments.  ‘You are not dealing with a soulless corporation,’ said these brochures.”

Overall, So Big by Edna Ferber is a magnificent American novel and should be a must read for everyone.
Posted by Laura's Reviews at 2:08:00 PM