The Other Widow by Susan Crawford (TLC Book Tour) 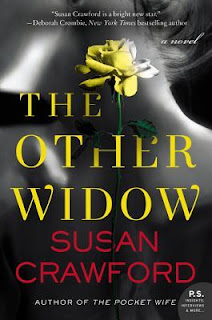 Dorrie and Joe are having an affair, but Joe is about to end it right before they are involved in a car crash.  Dorrie flees the scene once she realizes that Joe has died, as she knows he wouldn’t want the world to know he had a lover.  Strangely his air bag did not go off, and Dorrie starts to receive phone calls from his burner phone after his death.

Joe’s wife Karen has suspicions that he was cheating, but after his death, she discovers that there was an extra cup of hot chocolate in the car.  She starts to dig through his files, she finds more proof that he was cheating.  She also wants to know what was going on with his business and why there are so many problems.  Were any of these problems related to his mysterious death?

Maggie Brennan is a veteran and was on the police force until she froze during a situation and felt she could no longer wear the badge.  She now works for an insurance agency and is assigned to study Joe’s death, especially as he wife took out a large policy right before his death.  As she investigates, it turns to obsession and she soon realizes that Joe’s death was no accident.

“It was then that Dorrie learned to be an actress, a happy child, a smiling face struck to her father’s thick black wall of grief.”

“Dorrie’s often thought that restlessness and Catholicism are a dangerous mix, that she’s always been a little too forthcoming, a little too contrite for her own good.”

“Is that when it stared she wonders now – the space between them?  Where does it go, the falling into each other’s arms the passion, the lovemaking?”

“Maybe the only way to really feel it is to strip away the outsides, the layers that bounce us through our lives, to feel the tip of someone’s finger running down the bones beneath your skin.”

I liked the three different viewpoints.  I usually do not like the “other woman,” but in this case, Dorrie was written as a complex three dimensional being and I actually liked her, Karen, and Maggie.  I appreciated that the wife, Karen, was not written as an evil shrew that drove Joe to cheating.  Both Dorrie and Karen were good women, Joe was the scumbag! J  I liked Maggie’s story and her problems with PTSD and trying to get through it while solving this crime.  Overall, a great complex story with great characters that left me guessing until the end!

Book Source:  Review Copy for being a part of the TLC Book Tour
h2>About The Other Widow • Paperback: 352 pages • Publisher: William Morrow Paperbacks (December 6, 2016) The author of The Pocket Wife explores the dark side of love, marriage, and infidelity in this sizzling novel of psychological suspense. Everybody’s luck runs out. This time it could be theirs . . . It isn’t safe. That’s what Joe tells her when he ends their affair—moments before their car skids off an icy road in a blinding snowstorm and hits a tree. Desperate to keep her life intact—her job, her husband, and her precious daughter, Lily—Dorrie will do everything she can to protect herself, even if it means walking away from the wreckage. Dorrie has always been a good actress, pretending to be someone else: the dutiful daughter, the satisfied wife, the woman who can handle anything. Now she’s going to put on the most challenging performance of her life. But details about the accident leave her feeling uneasy and afraid. Why didn’t Joe’s airbag work? Why was his car door open before the EMTs arrived? And now suddenly someone is calling her from her dead lover’s burner phone. . . . Joe’s death has left his wife in free fall as well. Karen knew Joe was cheating—she found some suspicious e-mails. Trying to cope with grief is devastating enough without the constant fear that has overtaken her—this feeling she can’t shake that someone is watching her. And with Joe gone and the kids grown, she’s vulnerable . . . and on her own. Insurance investigator Maggie Brennan is suspicious of the latest claim that’s landed on her desk—a man dying on an icy road shortly after buying a lucrative life insurance policy. Maggie doesn’t believe in coincidences. The former cop knows that things—and people—are never what they seem to be. As the fates of these three women become more tightly entwined, layers of lies and deception begin to peel away, pushing them dangerously to the edge . . . closer to each other . . . to a terrifying truth . . . to a shocking end.

Susan Crawford grew up in Miami, Florida, and graduated from the University of Miami with a BA in English and a minor in psychology. She later moved to New York City and then Boston before settling in Atlanta to raise three daughters and work in the field of adult education. A member of the Atlanta Writers Club and the Village Writers, Susan teaches at Georgia Piedmont Technical College and dabbles in local politics. She lives with her husband and a trio of rescue cats in Atlanta, where she enjoys reading books, writing books, rainy days, and spending time with the people she loves. Find out more about Susan at her website, and connect with her on Facebook and Twitter.
Posted by Laura's Reviews at 12:06:00 PM