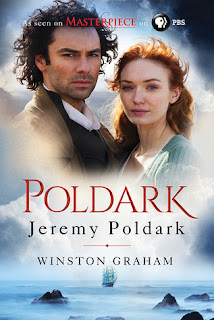 “Mommy, is that man going to take his shirt off again? He’s so handsome.” – Penelope, six years old.

I’ve been watching Poldark from last fall as I always seem to be slightly behind on my TV viewing. I’m also trying to read the corresponding books to get me ready for Season 3 this fall. I typically watch it while folding clothes. My six-year old daughter Penelope now likes to come in and see what I’m watching as she finds Poldark very handsome. Although I’m watching Masterpiece Theatre, Penelope makes me feel like I’m watching a daytime soap opera. Poldark’s shirt does seem to magically disappear almost every episode, but hey, a man gets hot working in a copper mine!

Besides the excellent television adaptation, I have been enjoying the Poldark historical fiction book series by Winston Graham as well. I wish that I would have discovered this book series sooner, but I am enjoying it now! It is set right after the American Revolutionary War. Ross Poldark was fighting with the British and came back to America defeated only to find his fiancée now engaged to his cousin. The series covers the lives of Ross and friends and foes that intersect his life. The Poldarks are copper / tin mine owners as well, and I find the storylines about the mining very intriguing.

Jeremy Poldark is the third book of the series. It picks up right where Demelza ended. Ross is in a very dark place after the death of his only child Julia and finds himself at the wrong end of the law as he goes to trial accused of inciting a riot and making the locals salvage the contents of two ships that ran aground in the previous book. His wife Demelza uses her skills to try to help Ross out, but his enemy George Warleggan is on the other side trying to make sure Ross ends up at the end of the hangman’s noose. Will Ross make it and will the Poldark family be able to get over the personal affronts that happened in the past to get together as one united family? Will Ross be able to get his mine going and profitable?

I enjoyed the actions and all of the characters in Jeremy Poldark. Demelza is one of my favorites. I love her strength. She’s a fish out of water in Ross’s world, but she is a good person and is able to win the love of everyone. I also loved how Doctor Dwight Enys has a love story of his own after the tragedy that befelled him in the previous books. The characters have large story arcs that encompass love, tragedy, and copper mining, but they also have smaller stories that I love as well. For example when Ross’s cousin Verity has to meet her step children for the first time and the awkwardness that ensues. The TV series did an excellent job of adapting this book.

“Her nature always preferred the straightforward settlement to the lingering suspicion.” - This passage is about Demelza, I feel the same way!

“Resentment and bitterness and old grudges were dead things that rotted the hands that grasped them.”

“She felt that if she was not careful she might become a part of the mob in the yellow dark, be caught up in it and lose her individual purpose and volition, being sucked toward the window with each wave that broke.”

“’Maybe it’s because I’m from common stock, but I want the home about me: candles burning, curtains drawn, warmth, tea, friendship, love. Those are what matter to me.’” Another great quote from Demelza.

“Human beings were blind, crazy creatures, he thought, forever walking the tightrope of the present condemned to ever changing shifts and expedients to maintain the balance of existence, not knowing even as far ahead as tomorrow what the actions of today would bring.”

Overall, Jeremy Poldark was an excellent book and the Poldark series is amazing historical fiction. I love the setting and the characters. The TV series is doing a wonderful job of adapting these novels. I have the next three books on my night stand – hopefully I’ll be reading them soon!

What novel do you enjoy that has been adapted into a TV series?