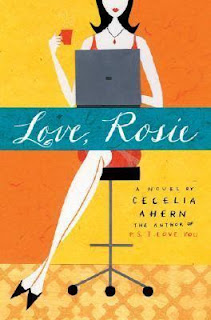 Rosie and Alex are best friends growing up in Dublin.  They are separated when Alex’s Dad accepts a job in Boston.  After Rosie finds herself a pregnant teenager, they find themselves on very different paths as adults, never able to reconnect.  How will Rosie and Alex’s love story end?

Love, Rosie is an epistolary novel that is composed of letters, texts, chat rooms, and emails to create the story.  I thought it was a good way to put the story together and it kept me entertained.  There were a couple of times that I wasn’t sure who the author of an email was as there was no signature, but I could usually figure it out.

I liked the characters in the novel, especially the main duo and Rosie’s best friend Ruby. Rosie and Ruby had fun adventures together and I loved that Ruby was able to speak frankly to Rosie.  Rosie’s daughter Katie and her best friend Toby parallel Rosie and Alex’s story.

This novel just went on too long for me.  I really slowed down reading it at the end as I just couldn’t get over the fact that Alex got married AGAIN for the second time to someone other than Rosie.  They had too many misunderstandings and near misses to be believable to me.  I think if this novel would have been edited down 100 pages or so, it would have been much better.

Alex misspells know as no throughout the novel.  This was funny when he was a kid, but grew to really annoy me over the course of the novel as Alex became a doctor.  Rosie’s daughter Katie did this as well.  Do any funny quirks of a book start to annoy you after awhile?

Love, Rosie was the April Kewaunee Library Book Club pick.  I sadly realized today looking at the calendar that I will probably not be able to attend the book club due to my daughter’s field trip.  It would be interesting to see what direction the discussion on this book would take.

Overall, Love, Rosie is an entertaining epistolary romance, but the story went on for at least one hundred pages too long.