Best Movie Year Ever: How 1999 Blew Up the Big Screen by Brian Raftery 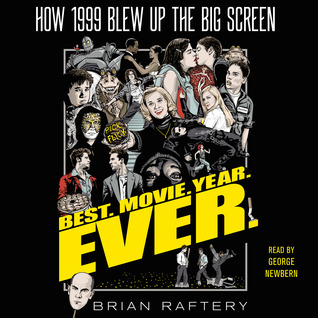 Words cannot express how much I enjoyed this audiobook.  I love movies and books . . . and listening to an audiobook about movies is right up my ally.  Even better is that I was 21 years old in 1999 so I will go along with the thesis that 1999 was a premiere year for movies.  I always have read and heard how 1939 was the premiere movie year so it was interesting to listen to a new perspective, and one that is more current.

I was surprised listening to this audiobook just how many excellent movies came out in 1999:  Fight Club, Office Space, The Matrix, The Sixth Sense, 10 Things I Hate About You are just a few examples and all movies I love.  As a young woman, I was in college, and watching these movies either at the theatre or on videotape.  I remember watching The Blair Witch project on campus with the cheap movies that would play weekly through the year.

This audiobook had a great narrator who made it interesting to listen to – I love his conversational, enthused tone.  He made the audiobook like a conversation I would have with a friend about movies.  It was very entertaining.

I had not watched all of the movies that were mentioned, but I found it all interesting.  Author Brian Raftery masterfully gives not only a summary of what the movie is about, but what made it special and capture the imagination of people in 1999.  There were insights into how the movie was made, marketed, and released.  It also had interviews from those involved in the making of the movie from the actors, actresses, directors, etc.  It discussed why the movie fit into what people were feeling at the time.  It was fascinating, even learning about movies that I have not seen.

I really liked the discussion about how the proliferation of indie movies at the time allowed freedom, experimentation, and unique movies.  It made me sad that we don’t see that now, but author Brian Raftery made a case for TV having taken over the mantel shortly afterwards with the Sopranos and how now many of the new daring movies are shown on streaming services.  It was a very interesting discussion point.

Overall, Best Movie Year Ever:  How 1999 Blew Up the Big Screen is a fascinating audiobook for those that love movies and late 90’s culture or who would like to learn about it.    I would love to listen to more audiobooks like this.  Does anyone else know of other good books about movies?  I hope Brian Raftery writes more books!
Posted by Laura's Reviews at 4:26:00 PM