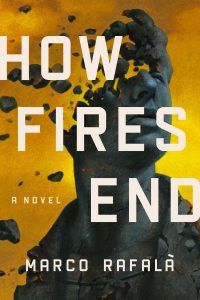 Can a curse carry through the generations?  David is a young boy growing up in Middletown, Connecticut in the 1980’s.  He lives alone with his aloof father, Salvatore, after his mother’s death, but has the support of his Aunt Nella and family friend Vincenzo.  David is constantly bullied by Tony Morello at school and there seems to be a history between their two fathers that David can’t quite piece together.  As the town celebrates Saint Sebastian, it brings the family history to the forefront as it harkens back to Salvatore’s youth in World War II era Sicily.  Will family secrets of yesterday bring about tragic circumstances today?

The story is told from three different view points in the first person, David, followed by Salvatore, and the final third is Vincenzo’s story.  Nella has a short chapter at the start and end of the novel.  I also liked the brief author note at the end that states that the author was inspired by stories his father told about hiding in caves in Sicily during World War II.   His father often told the story of Saint Sabastian and how his statue came to Melilli.  Its fate remains a mystery except for in the fictional world of this story.

I thought the story was unique and very interesting. I have never read about World War II in Sicily and I thought it was fascinating.  I also liked the ripple effect that the choices made during the war had moving down through the generations.  I was shocked by the end of the first third of the book and it really kept me reading quickly through the end as I thought it couldn’t be true.  I was a bit confused on the timing as I thought that Salvatore was pretty old to have a kid in the 1980’s and it seemed strange that another man his age would also have a late in life baby.  The math seemed slightly off to me.  As a Catholic, I enjoyed how the Catholic faith played a role throughout the story.  I had to look up Saint Sabastian when I got done reading this one.

Favorite Quotes:
“That was the first time I noticed, but when I thought back on it, I recognized the small way he carried himself in the world when he thought no one was watching.”

“The left Melilli, chasing the promise of good-paying jobs and a better life.  They left to forget war, forget poverty, forget hunger, and forget the bodies of the loved ones they lost.  But they would not forget their saint.”

Overall, How Fires End was a riveting debut novel that told a unique story of family tragedy set in WWII era Sicily that spanned through the generations.

Book Source:  Review copy for being a part of the TLC Book Tour.  Thank-you!  For more stops on this tour, check out this link.

About How Fires End

A dark secret born out of World War II lies at the heart of a Sicilian American family in this emotional and sweeping saga of guilt, revenge, and, ultimately, redemption.

After soldiers vacate the Sicilian hillside town of Melilli in the summer of 1943, the locals celebrate, giving thanks to their patron saint, Sebastian. Amid the revelry, all it takes is one fateful moment for the destiny of nine-year-old Salvatore Vassallo to change forever. When his twin brothers are killed playing with an unexploded mortar shell, Salvatore’s faith is destroyed. As the family unravels, and fear ignites among their neighbors that the Vassallo name is cursed, one tragedy begets another.

Desperate to escape this haunting legacy, Salvatore accepts the help of an Italian soldier with fascist ties who ushers him and his sister, Nella, into a new beginning in America. In Middletown, Connecticut, in the immigrant neighborhood known as Little Melilli, these three struggle to build new lives for themselves. But a dangerous choice to keep their secrets hidden erupts in violence decades later. When Salvatore loses his inquisitive American-born son, David, they all learn too late the price sons pay for their fathers’ wars.

Written with elegiac prose, How Fires End delves into the secret wars of men; the sins they cannot bury; and a life lived in fear of who will reveal them, who will survive them, and who will forgive them
.

Marco Rafalà is a first-generation Sicilian American, novelist, musician, and writer for award-winning tabletop role-playing games. He earned his MFA in fiction from The New School and is a cocurator of the Guerrilla Lit Reading Series in New York City. Born in Middletown, Connecticut, he now lives in Brooklyn, New York. How Fires End is his debut novel. For more information, visit www.marcorafala.com. Follow Marco on Twitter and Instagram.
Posted by Laura's Reviews at 8:23:00 PM