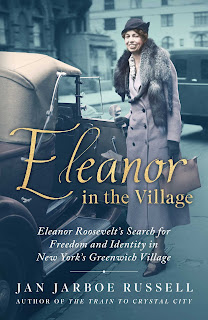 Title:  Eleanor in the Village

The subtitle of Eleanor in the Village is Eleanor Roosevelt’s Search for Freedom and Identity in New York’s Greenwich Village.  I love to read about first ladies and had not read much about that time in Eleanor’s life.  I was happy to be able to listen to and review this audiobook.

Eleanor in the Village gives an overview of Eleanor Roosevelt’s life starting from her parents getting together through her death.  It discusses Eleanor’s troubled relationship with her parents and how she became an orphan early.  She fell in love with Franklin Roosevelt, and it built up her self-confidence that he loved her as well.  Her marriage was troubled as she had an overbearing mother-in-law that took away Eleanor’s control over her own household and children.  She limped along at least secure in Franklin’s love, until one day she discovered letters in a suitcase from his mistress and discovered he really loved somewhere else.  That was the end of their physical marriage and they were a political partnership from that point on.  How did they work together and how did Eleanor become a powerful woman herself?

I loved reading about how Eleanor really came into her own once she discovered Franklin’s affair.  It was during this time that she lived in the Village and became friends with lesbian couples, free thinkers, and potential communists.  It was also during this period that J. Edgar Hoover started having her surveilled even though her husband was not in political office at the time.  I thought it was amazing to learn that there are still about twenty pages of secret files on Eleanor Roosevelt that the United States Government has not released to her grandson.  I thought it was also interesting that she had so many assassinations attempts against her with her work with civil rights in the South, and that the FBI did not work on trying to solve them.

Franklin Roosevelt was a great president, but a terrible husband.  I thought it was interesting how he was the “love of their life” for Eleanor and at least two other women.  This book examines Eleanor’s sexuality, but comes away with few conclusions.  She did have friends that were lesbian couples, and she had a love affair with a woman and a man.  It is not clear whether the relationships were consummated.  It also discusses how times were different back then where the press shielded the fact that Franklin and Eleanor did have an unconventional marriage.

My only negative was that I thought the book was going to really focus on Eleanor’s time in the Village.  It talked about it somewhat but was really more of an overview of her life with an emphasis on the Village.

Samantha Desz was a great narrator and I enjoyed listening to this audiobook.

Overall, Eleanor in the Village is a good overview biography of Eleanor Roosevelt.