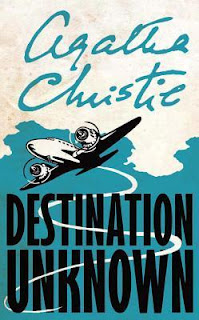 Would you travel to a destination unknown if given the opportunity?

Destination Unknown was the August selection for the #ReachChristie2022 Challenge.  I read it back in August and was intrigued.  This is more of a spy thriller than a standard Christie mystery.

Tom Betterton is a top US nuclear scientist in the 1950s who has relocated to England and remarried.  He goes a trip to Paris and disappears.  What has become of him?  Hillary Craven has decided to end her own life when she is interrupted by a British government agent who asks a woman who does not fear death to help out her government. Where will Hillary’s new duties as a spy take her and will she find Tom Betterton?  Why other scientists disappearing from Western countries during the midst of the cold war?

I really want to see this as a Hitchcock film.  I thought it was a very interesting story.  I liked how the top scientists were recruited and were living together in a secret community. It was also interesting that Christie chose to have Betterton work on atomic science with enough truth to the matter to make it sound plausible, but it was really a McGuffin like in a Hitchcock movie.  I liked Hillary Craven’s character and seeing the journey unfold through her eyes.  I did think the action slowed down as the book progressed.  It had a satisfying ending.