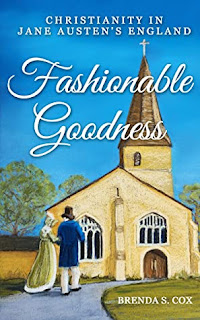 Fashionable Goodness by Brenda S. Cox is a fascinating look into how Christianity influenced Jane Austen’s works.  Cox takes a deep dive into researching and explaining how the Church of England was set up at the time of Austen, Austen’s history with the church and religion, and how it was reflected in her writings.  As the daughter and sister of clergymen, Cox estimated that Austen knew 100 clergymen.  I thought it was very interesting and enjoyed reading this book.

I liked that the title “fashionable goodness” refers to people and characters such as Mary Crawford in Mansfield Park who attend church to appear fashionable, and not because they have a deep faith.  Cox explores that Austen has more than a fashionable goodness – she had a deep and abiding faith.  That did not stop her at poking fun at the foibles of the clergy, but some of her best characters were also clergymen, such as Henry Tilney.

Fashionable Goodness will be a resource that I will be using again in the future.  It has extensive notes to explain the details of research and the meanings behind items.  It has great pictures.  My favorite were fascinating tables that the author put together to explain things such as the church of England hierarchy, the difference between rectors, vicars and curates in Austen’s England, incomes in Austen’s England, etc.  I love data and tables and I’ve already read these multiple times.  Also included in the appendices is George Austen’s letter to Frank Austen when he went to sea in 1788 at age 14.  It is a great letter of fatherly advice, and he especially tells him, “The first & most important of all considerations to a human being is religion or a belief of a God & our consequent duty to him, our Neighbour, & ourselves.” It’s a great letter and also wonderful that Frank held onto it and passed it down his family tree.  Also in the appendices are Jane Austen’s prayers, a timeline, places to find further information, and more.

I found Fashionable Goodness to be an absorbing book that gave me a lot of great details to further understand Austen’s novels.  I highly recommend it to any fan of Jane Austen’s works. 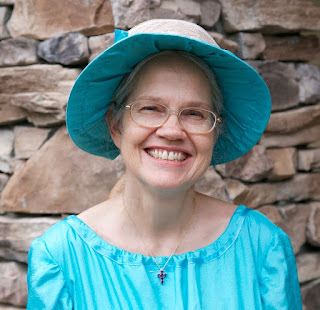 “While we may interpret Austen’s timeless novels according to our own experiences and values, we can enjoy them more deeply as we get to know Austen’s world.”

“Jane Austen’s novels reflect her deep religious faith.  Her best characters live according to religious values and principles, or learn to, while her worst characters do not.”

Review Copy from author Brenda S. Cox as part of the Book Tour.  Thank-you! I received a
complimentary copy of this book. Opinions expressed in this review are completely my own.