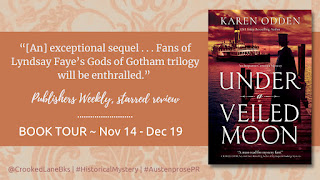 Have you ever taken a cruise?   If so, where have you gone?  I have never been on an ocean cruise, and with a husband that gets seasick, I don’t think it’s in my future.  I have been across Lake Michigan many times on the SS Badger and that is a fun cruise.

Under a Veiled Moon by Karen Odden is a historical mystery novel set in 1878.  The wooden pleasure craft Princess Alice has collided with an iron-hulled collier, the Bywell Castle, on the River Thames.  This disaster killed hundreds of people and was the worst maritime disaster in London history. Was this truly an accident or was it a sabotage by the Irish Republican Brotherhood?  Scotland Yard Inspector, Michael Corravan in on the case.  His investigation is made more difficult by the fact that he is Irish born himself and the newspapers have whipped up a frenzy of anti-Irish sentiment.

I greatly enjoyed this historical mystery.  I thought Michael Corravan was an intriguing character and I loved learning more about him and his world.  The novel does a great job of world building in Victorian London, giving the reader a sense of walking through the streets and seeing the City as it once was.  It also gave a good description of politics and prejudices at the time.  I found the mystery to be intriguing and read through this relatively quickly as I wanted to know what would happen next. The writing was very compelling.

The ending was good and left me intrigued to find out more about Inspector Corravan’s past.  The author also had a great note explaining the real history of the events in the novel.  There are also great questions for a book club to use.

Long time readers of my blog will know that I am always looking for wastewater or water treatment in books I read as I am an environmental engineer and I focus on wastewater compliance with my job.  I was interested in this novel that they referenced Erith as London’s sewage treatment plant and the Crossness Pumping Station.  I took a look on Wikipedia and found a beautiful picture of this pumping station.  It is much more architecturally beautiful than the wastewater plants I usually visit.  Edward, the Prince of Wales, opened this pumping station.  Why did it stink so much in the novel when they pass by in the river in 1878?  Pumping stations were used by big cities at the time to pump wastewater out in the waterways away from the city.  Positive, it’s out of the city, but negative, it’s now in your river, lake, estuary, or ocean.  This was the start of wastewater treatment, but many advancements would take place of the next fifty years including at this particular pumping station.  I was intrigued to see it’s now a museum so I’m adding to my list of things I want to see in London.  My wastewater sidebar is now over . . . 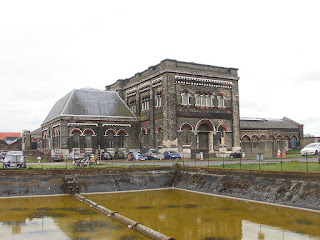 “We all carry pieces of our past with us.  Sometimes they’re shiny and worthy as new half crowns in our pockets.  Sometimes they’re bits of lint or scraps of paper shredded beyond use.  Plenty of my memories carry a stab of regret or a burn of shame with them, and honestly, there are times when I wonder how we all bloody well live with the fool things we’ve done.” – Great opening paragraph.

“I hadn’t meant that.  But there was no point in speaking.  I’d felt loss like his before, a loss that shredded all reason, a loss that tore language from its meaning, so that nothing anyone said made a whit of difference.”

Overall, Under a Veiled Moon by Karen Odden is one of the best historical mysteries I’ve read this year and I am eager to read more by this author.

Review Copy from author Karen Odden as part of the Austenprose PR Book Tour.  Thank-you! I received a complimentary copy of this book. Opinions expressed in this review are completely my own. 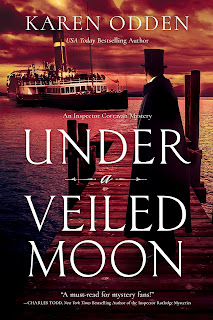 In the tradition of C. S. Harris and Anne Perry, a fatal disaster on the Thames and a roiling political conflict set the stage for Karen Odden’s second Inspector Corravan historical mystery.

September 1878. One night, as the pleasure boat the Princess Alice makes her daily trip up the Thames, she collides with the Bywell Castle, a huge iron-hulled collier. The Princess Alice shears apart, throwing all 600 passengers into the river; only 130 survive. It is the worst maritime disaster London has ever seen, and early clues point to sabotage by the Irish Republican Brotherhood, who believe violence is the path to restoring Irish Home Rule.

For Scotland Yard Inspector Michael Corravan, born in Ireland and adopted by the Irish Doyle family, the case presents a challenge. Accused by the Home Office of willfully disregarding the obvious conclusion and berated by his Irish friends for bowing to prejudice, Corravan doggedly pursues the truth, knowing that if the Princess Alice disaster is pinned on the IRB, hopes for Home Rule could be dashed forever.

Corrovan’s dilemma is compounded by Colin, the youngest Doyle, who has joined James McCabe’s Irish gang. As violence in Whitechapel rises, Corravan strikes a deal with McCabe to get Colin out of harm’s way. But unbeknownst to Corravan, Colin bears longstanding resentments against his adopted brother and scorns his help.

As the newspapers link the IRB to further accidents, London threatens to devolve into terror and chaos. With the help of his young colleague, the loyal Mr. Stiles, and his friend Belinda Gale, Corravan uncovers the harrowing truth—one that will shake his faith in his countrymen, the law, and himself. 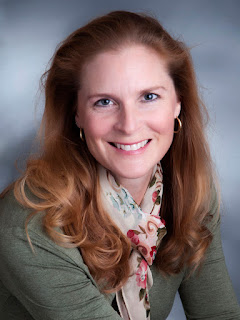 earned her Ph.D. in English from New York University and subsequently taught literature at the University of Wisconsin-Milwaukee. She has contributed essays to numerous books and journals, written introductions for Victorian novels in the Barnes & Noble classics series and edited for the journal Victorian Literature and Culture (Cambridge UP). Her previous novels, also set in 1870s London, have won awards for historical fiction and mystery. A member of Mystery Writers of America and Sisters in Crime and the recipient of a grant from the Arizona Commission on the Arts, Karen lives in Arizona with her family and her rescue beagle Rosy.