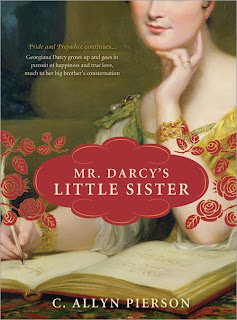 Today I am thrilled to have C. Allyn Pierson, the author of the new novel Mr. Darcy's Litle Sister as a guest blogger. I just finished Mr. Darcy's Little Sister last week, and I loved it (see my review here). I can't wait to get my hands on it! Thank-you for writing a great guest post Ms. Pierson!
Why I Chose to Write About Georgiana
by C. Allyn Pierson

Georgiana Darcy is an interesting figure for me because her name and description are scattered throughout Pride and Prejudice, but the reader does not actually meet her until after Elizabeth Bennet meets Darcy again at Pemberley, when she finds that he has greatly changed. Darcy brings Georgiana to meet Elizabeth as soon as she arrives the next day, and Elizabeth and her aunt return the call the next morning. Because the reader knows only the varied descriptions of Georgiana by her brother and Miss Bingley, we are surprised to find that Georgiana is not haughty and proud, as she sounded from Miss Bingley’s description, but is painfully shy and reticent. Even at the end of the book we do not have a clear grasp of Georgiana’s personality and she remains an enigma.

This mystery of who Georgiana really is intrigued me and I reread Pride and Prejudice again multiple times to get a feel for her character. In addition, the sketchy portrait of Georgiana gave me ample license to fill out her character as I wished. If I were writing about Darcy or Elizabeth I would have to make them fit into the world Jane Austen created and there would be many fewer options to use to develop my story. In addition, Austen clearly states that Georgiana has such great respect for her elder brother that it almost overcomes her affection for him and when she meets Elizabeth there is a lot of tension when Darcy enters the room and Georgiana feels she must exert herself to meet his expectations. She clearly struggles to meet his expectations. This tension between the two Darcy’s: the pull of love and affection for a brother and the natural rebelliousness of a teenager struck me and made me want to explore it.

Although children were much more strictly brought up in the 19th Century, I am sure that teenagers experiences the same feelings of needing to break out from their families control as modern teens do, but they were given many fewer choices. Children were not really considered individuals, but were an extension of their families, so there was a lot of pressure to conform to the standards the parents set down. Georgiana struck me as a very conformable young woman, but she was clearly well educated for her day and had many accomplishments, so I think her transition from girlhood to adulthood would be a difficult one. These qualities attracted me to her character and made me want to explore who she was in my book.


MR. DARCY’S LITTLE SISTER BY C. ALLYN PIERSON—IN STORES SEPTEMBER 2010
Pride and Prejudice continues...Georgiana Darcy grows up and goes in pursuit of happiness and true love, much to her big brother's consternation
A whole new side of Mr. Darcy...
He's the best big brother, generous to a fault. Protective, never teases. But over his dead body is any rogue or fortune hunter going to get near his little sister! (Unfortunately, any gentleman who wants to court Georgiana is going to have the same problem...)
So how's a girl ever going to meet the gentleman of her dreams? 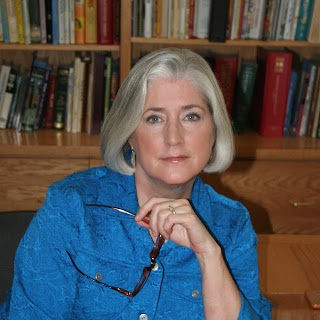 About the Author
C. Allyn Pierson is the nom-de-plume of a physician, who has combined her many years of interest in the works of Jane Austen and the history of Regency England into this sequel to Pride and Prejudice. She lives with her family and three dogs in Fort Dodge, Iowa. http://www.callynpierson.com/
Giveaway Details
Danielle of Sourcebooks has been kind enough to offer two copies of the Mr. Darcy's Little Sister by C. Allyn Pierson for this giveaway. I have decided to give a try at simplifying my giveaways so lets see how this experiment works . . .
If you would like to win a copy of Mr. Darcy's Little Sister, please leave a comment about what intrigues you about Mr. Darcy's Little Sister or what you liked about Ms. Pierson's guest blog.
As part of your comment, you must include an email address. If I can't find a way to contact you I will draw another winner.
I will be using random.org to pick the winners from the comments.
This contest is only open to US and Canadian residents (Sorry!).
No P.O. Boxes.
The deadline for entry is midnight, Friday September 24th.
Good luck!
Posted by Laura's Reviews at 3:31:00 PM