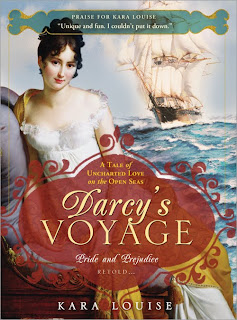 Thanks for inviting me here today. These are great questions and I hope I can answer them to your satisfaction.

1. What was your inspiration for retelling the tale of Pride and Prejudice with a different meeting of Darcy and Elizabeth, first on a carriage ride, and then on a sea voyage to America?
I actually wrote the meeting between the two of them on a carriage for another story idea. I never got further than that meeting, and it remained in my file for a while. When I began writing Darcy’s Voyage (then titled Pemberley’s Promise), I decided to add it to that story and have Darcy and Elizabeth initially have only vague recollections of that first meeting when they encounter one another on the ship. I was inspired to write a story of them at sea after reading Richard Henry Dana’s Two Years Before the Mast. It was very interesting to me to read his account of his travels at sea in the 1840s, and although a little later than the time period of Pride and Prejudice, I decided I would love to write a story placing Darcy and Elizabeth on a ship bound for America.

2. One aspect of the novel that troubled me was that Elizabeth was not accompanied by a chaperone on either her carriage ride or her voyage to America. As it was common practice for young ladies at the time always to have a chaperone, what made you decide to not have one for these occasions?
I have little justification other than wanting to write it that way. Well, that is not altogether the truth. For Elizabeth’s being unchaperoned, I always felt she had a rebelliousness to her that defied convention, while not being “wild,” like we see with her sister, Lydia. She often walked about her hometown unchaperoned, including jumping over stiles and walking through the mud. She had no qualms about showing up at Netherfield with her ankles six inches in mud! I will concede that perhaps, at least in the carriage, I should have thought about a chaperone, but I love what that scene in particular added to the overall story!

As for her traveling unchaperoned on the ship, I felt that the Bennets would not have had anyone to accompany her, and that Elizabeth would have greatly desired take such an adventure. Likewise, I knew Mr. Bennet did not always consider what was prudent in ruling his household, particularly his daughters. He had nothing to worry about regarding Elizabeth’s behavior, but I did insist upon him putting Elizabeth under the captain’s protection when they boarded the ship.

3. On a similar note, what made you decide to have Elizabeth travel in steerage?
Part of my answer is what I envisioned for the ship, which I cover in the next question. But truthfully, I did think a great deal about the reasons why she might have traveled down there. First of all, we know her family did not have a great deal of money. The expense of securing a cabin for Elizabeth would have been much greater, and knowing the financial states her family was in, Elizabeth would not have wanted to spend any more than they had to. I reasoned that Elizabeth wanted to take this amazing journey and would sacrifice anything, even her comfort, to take the opportunity to sail to America.

4. Did you find out any interesting facts during your research on sea voyages in the early 19th century?
Pemberley’s Promise is the name of the ship in Darcy’s Voyage, and you can tell by that name that Mr. Darcy is the owner. I found an interesting website about a ship that took about a thousand Irish people to America during the great famine. The Jeanie Johnston sailed in the mid-nineteenth century and carried many across the sea looking for a better life or joining family. I was impressed by this story because they never lost one passenger and attributed that to the ship’s humane conditions and its compassionate captain. I envisioned this for Pemberley’s Promise, a ship that even down in steerage the conditions were not totally unbearable. This site is also where I discovered that two children would be considered one adult in the sleeping berths, which provided that part of the story. You can read more about the ship here: http://www.jeaniejohnston.net/history.html

5. Who is your favorite character in this novel . . . Darcy, Elizabeth, or one of the secondary characters? Personally I loved Darcy and Elizabeth, but I also loved seeing Georgiana blossom a bit in the novel as well.
Of course I love the characters of Darcy and Elizabeth, but I will also concur with you that Georgiana is one of the characters I love to write. I tend to write her as very instrumental in helping Elizabeth see the error of her ways as it pertains to her opinion of Darcy. Sometimes Georgiana catches on very quickly that there is something special between them, other times, not. I think in Darcy’s Voyage she tries to put two and two together but cannot quite come up with the right answer. And I love writing her as someone who truly loves and admires Elizabeth.

6. You have written other Pride and Prejudice inspired novels. Can you give us the details on a couple of your favorites?
Darcy’s Voyage is probably my favorite (for now!), but my next favorite is being published by Sourcebooks in Spring 2011. That book, originally titled Something Like Regret, has been re-titled Only Mr. Darcy Will Do. This is another variation in which begins almost immediately after returning from Kent after Darcy’s first proposal, Mr. Bennet dies, leaving the Bennet ladies having to face moving out of Longbourn. Elizabeth and Jane become governesses, Jane for the Gardiners’ children and Elizabeth to a young girl, whose family, it turns out, is acquainted with Mr. Darcy. She suddenly finds herself thrown into his presence, and even more so when the family is invited to Pemberley. There, she begins to see his goodness, but realizes even more the difference in their stations.

7. What is next for you? Are you at work on a new novel that you could share with us?
I wrote a series of short stories based on Elizabeth and Darcy as they celebrated the holidays their first year of marriage. I take them from Christmas to New Years, Valentines Day, and then end the book with a very special event. I wrote it several years ago and right now I am cleaning it up before I publish it. I have a couple other Austen related novels mulling about in my head as well. One is another Pride and Prejudice variation and the other is a back-story to a character in another novel of hers.

8. I always love to learn who authors love to read. Can you list a few of your favorite books and authors?
I have been reading Georgette Heyer’s book for about a year now, and love them. She has just a talent for giving us a variety of characters that end up in so much mischief. Some of them are truly laugh-out-loud books, and I an enjoying working my way through them. So far, of the 8 or so that I have read, my favorites have been Regency Buck and Arabella. I also have enjoyed the Carrie Bebris murder mystery series using Jane Austen’s characters. I also enjoy a couple Kansas authors, Deb Raney and Kim Vogel Sawyer.

In this enchanting and highly original retelling of Jane Austen’s Pride and Prejudice, Elizabeth Bennet sets out for the new world aboard the grand ship Pemberley’s Promise. She’s prepared for an uneventful voyage until a chance encounter with the handsome, taciturn Mr. Darcy turns her world upside down.

When Elizabeth falls ill, Darcy throws convention overboard in a plan that will bind them to each other more deeply than he ever could have imagined. But the perils of their ocean voyage pale in comparison to the harsh reality of society’s rules that threaten their chance at happiness. When they return to the lavish halls of England, will their love survive? 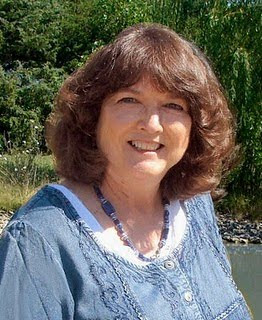 ABOUT THE AUTHOR
Ever since Kara Louise discovered and fell in love with the writings of Jane Austen she has spent her time answering the "what happened next" and the "what ifs" in Elizabeth's and Darcy's story. She has written 6 novels based on Pride and Prejudice. She lives with her husband in Wichita, Kansas. For more information, please visit her website, Jane Austen’s Land of Ahhhs, http://ahhhs.net/.


Thank-you for the great answers to my questions Kara Louise!! I loved your answers, and am looking forward to your next novels. Only Mr. Darcy Will Do has an interesting premise just as Darcy's Voyage did, and I love holiday stories so that sounds intriguing as well!
Giveaway Details
Danielle of Sourcebooks has been kind enough to offer two copies of the Darcy's Voyage by Kara Louise for this giveaway. I have decided to give a try at simplifying my giveaways so lets see how this experiment works . . .
If you would like to win a copy of Darcy's Voyage, please leave a comment about what intrigues you about Darcy's Voyage or what you liked about this interview. As part of your comment, you must include an email address. If I can't find a way to contact you I will draw another winner.

I will be using random.org to pick the winners from the comments.
This contest is only open to US and Canadian residents (Sorry!).
No P.O. Boxes.
The deadline for entry is midnight, Friday September 17th.
Good luck!
Posted by Laura's Reviews at 6:26:00 PM