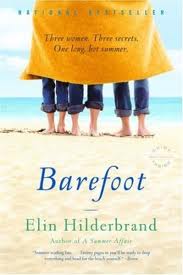 Barefoot was the February selection for my FLICKS Book and Movie Club.  Sadly Penelope was teething the night of the meeting and Ben and the boys were off to wrestling practice so I had to miss this month.  Barefoot is the second Elin Hilderbrand novel I’ve read.  I listened to and really enjoyed Silver Girl this past fall.


Barefoot is about three women with a vast array of problems who are vacationing on Nantucket Island.  Vicki has just discovered she has lung cancer and is going to go through chemotherapy while staying at the tiny cottage she inherited from her aunt on Nantucket.  Her sister Brenda is along to help out with Vicki’s two children, but is also running away from a mess.  A respected new professor, Brenda had it made until she had a ruinous affair with a handsome student and wrecked a prized painting at her college in the aftermath.  Now jobless and under investigation, Brenda needs to determine what course she needs to take for her future.  Vicki also invites her friend Melanie for the summer.  Melanie has just discovered her husband has been cheating on her, and that she is finally pregnant after endless rounds of invitro fertilization.  Unsure of what to do, Melanie leaves her husband without telling him about the pregnancy.
Having all of this drama together in one tiny cabin ensure that the summer will be anything, but boring.  To help with the kids, Brenda hires a babysitter, a young college student named Josh.  Josh noticed the woman when they first arrived at the island and is sure that they are destined to change his life.


I thought the story of Barefoot was interesting, but I didn’t like how the story was framed from Josh’s point of view.   It made the story feel odd and disjointed at times.  SPOILER ALERT:  I especially did not like Josh and Melanie’s affair.  I know Melanie’s husband cheated on her, but sleeping with your significantly younger babysitter while you are pregnant just gave me an “icky” feeling while reading those parts of the book.  SPOILER END  I did like Vicki’s storyline and her realistic struggle with cancer.  Somehow the power of her story was lessoned by the frivolity of the other plot lines.
Overall, Barefoot was a highly readable chick lit novel, but not as good as Hilderbrandt’s newer novel, Silver Girl.


Book Source:  The Kewaunee Public Library
Posted by Laura's Reviews at 1:30:00 AM