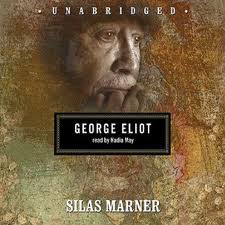 I’ve always heard Silas Marner described as a drab read, a lesser work of George Eliot that is forced upon school children because it is George Eliot’s shortest novel. I am happy to report that Silas Marner is neither drab nor a lesser work of Eliot. I found it to be an engaging, ultimately heartwarming and moral story about the true price of gold and human relations. It was a story that in many ways I found to be very relevant to today’s society. As Jane Austen did before her, Eliot writes about human characteristics that transcend time.

As the story starts, Silas Marner is a happy man with a good job as a weaver, a productive member of his church, a great best friend, and a fiancée. Things suddenly take a turn for the worst when Marner’s best friend frames him for a crime he didn’t commit, and also steals his fiancée. Bitter against his fellow church goers and town, Silas Marner moves away to a place where he is not known and where his weaving is prized. Making a good living, Marner values his gold and puts it above all human relations. Things soon change when his gold is stolen and a young child shows up on his door step shortly thereafter. He raises young Eppie as his own, until her real father shows up when Eppie is a teenager and wants to take her back. Will Eppie stay with Silas Marner or go to the father that abandoned her as a child?

George Eliot created a wonderful cast of characters in Silas Marner. Silas is the main character, but his neighbor lady Dolly Winthrop, is a wonderful lady who helps him raise Eppie. Squire Cass and his family are also fleshed out and discussed in great detail as their lives often intersect with Marner’s. I enjoyed listening to all of their lives. Nadia May was a great narrator. This was also the first book I listened to on my phone from the library. I love the system, but wish that there were more copies of digital audiobooks available to check out!

The most fascinating part of the book for me was how George Elliot captured timeless qualities in human interactions and life. My favorite example of this is how a bunch of old guys are together talking about how the youth of today are lazy and nothing like when they were young lads. How often have I heard this talk throughout my life about how the youth of whatever day are terrible compared with older generations.

Another example of this is problems with drugs. We hear about drugs in the news often and it seems like a problem just of today, but in Silas Marner, Eppie’s mother has a drug addiction that leads her to take one last fix that ultimately kills her and leaves her child an orphan in the snow. The drug of choice may have changed over time, but the deadly effects of them haven’t. As I continue to explore Victorian literature this year, I’ve noticed that drugs play a prominent role in many famous novels of that time. Any thoughts? I’ll continue my thoughts on this as I review other works.

Overall, Silas Marner is a moving, intriguing story, with characters and situations that are timeless.
Posted by Laura's Reviews at 12:55:00 AM