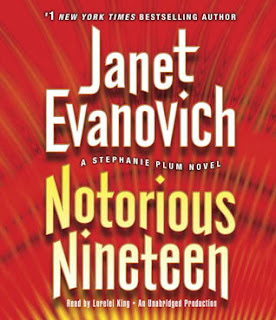 I’ll admit, the sole reason I am still reading the Stephanie Plum series is because I love, love, love Lorelei King’s narration. Her voices for all of the characters hit the mark and make me laugh out loud while I’m listening to the book driving to and from work. I wasn’t that impressed by the last two novels, but I do love the characters so I tried the latest and greatest, Notorious Nineteen.

Stephanie Plum and Lulu are back in the game. Stephanie is as usual low on funds and trying to catch a couple of guys that are out on bail. One in particular, went to the hospital to get his appendix removed and was never seen again. Where did he go and where is all of the money he stole from the assisted living facility he worked for?

Also to make things interesting, Ranger is in dire need of Stephanie’s help. He and his best friend from his elite Navy Seal days have been receiving death threats. Stephanie is Ranger’s date to various wedding related parties to help protect Ranger and keep an extra eye out for any danger.

Joe Morelli is still on the scene and he and Stephanie has tender moments. Unfortunately, Joe and Stephanie are still locked in a relationship limbo – they are together, but will they take the next step? And will Stephanie give it all up for Ranger?

Luckily Notorious Nineteen did not focus on the romance aspect, which was great as that has been annoying me greatly the past few books. The mysteries were intriguing, the action suspenseful and light hearted at different times. Lula was sadly missing from the last part of the novel, but otherwise, I thought this novel was better than the last few in the series. I hope this continues . . . and that Stephanie makes some forward growth in one of her relationships!