Bound for the Promised Land: Harriet Tubman, Portrait of an American Hero by Kate Clifford Larson 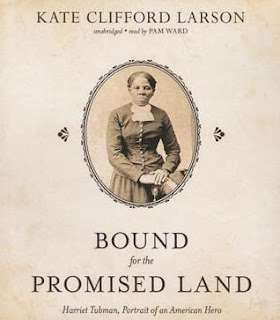 The most information that Americans know about Harriet Tubman was gleaned from children’s biographies taught in elementary school.  The majority of those biographies are based on an inaccurate biography written after the Civil War that was updated to not offend those in the South.  Bound for the Promised Land is the first adult biography of Harriet Tubman written since the 1940’s.  I found it curious that such an important figure in American History had not had an adult biography written for over 70 years.

The biography starts from Harriet’s early life and what can be gleaned about her ancestry.  What I found the most interesting is that Harriet’s mother and father were manumissed at a certain age by their owner.  This meant that after performing service for a certain period of time, a slave would be released from bondage and be a free individual.  Harriet’s mother Rit, was not freed upon the age of 45 by the owner that inherited her and either were her children.  I was deeply troubled that these promises could be made and put into wills only to be broken by future generations.

Harriet grew up watching her family split apart as siblings were sold off.  She finally ran away with two of her brothers after her husband refused to go with her.  The brothers didn’t make it all of the way, but Harriet did.  She didn’t get comfortable with her freedom, but spent a decade returning to Maryland and helping other family members and enslaved people escape to freedom.  I was amazed at how Harriet was able to be the master of disguise and to fool so many people, including her old master.  Also thinking about how many times she made this journey, which took so long in this time period is amazing.  I also loved how she worked with distinguished abolitionists of her day to obtain funds to keep making trips.  My favorite is when the New York office told her there were no funds and she waited in the office all day until visitors had collected enough money for her to go back.

Harriet’s service continued with the Civil War.  She was a valued scout and nurse all through the war, but sadly she was never paid as other scouts and nurses were.  She was also the first American woman to lead troops into battle.  After the war, Harriet settled in Albany and continued to help her family and everyone that came by and professed a need.  Tubman was always in extreme poverty as she spent a lifetime of giving and helping everyone, but herself.  She also worked for women’s rights.

Harriet was human.  One of my favorite parts of the book was when her parents and others living with at the time gave her a hard time as there was no food to eat.  She couldn’t take the haranguing anymore and sat in a closet.  Then she got up, took her basket, and went around town and was able to get things on credit and trade until she had enough for dinner.

Overall, I was amazed at what a life Harriet Tubman lived.  She was an amazing woman.  I also loved how her fight for freedom didn’t end with the Underground Railroad, or even the Civil War, she was fighting for women’s rights long afterwards.  She was also an unselfish person who was always helping those in need.

I was deeply disturbed in this book that Harriet Tubman’s story was changed through time, specifically that in order to repair relations with the South, much of the brutality and injustice that Tubman faced was whitewashed from history.  I find this a true travesty and wonder if this has continued into race problems of today.

I listened to the audiobook version of this story as narrated by Pam Ward.  She did a good job as a narrator, although I do admit that I wish that it would have had an African American narrator from the South.   Overall, this was an excellent work on Harriet Tubman’s life.
Posted by Laura's Reviews at 4:54:00 PM