Little House on the Prairie by Laura Ingalls Wilder 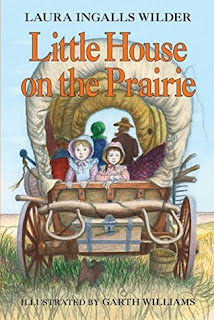 Little House on the Prairie is the account of Laura Ingalls and her family’s journey from the Big Woods of Wisconsin to the prairies of Kansas.  Too many people are moving to the Big Woods and driving out the game that Pa depends on for meat and furs to supplement the family’s income.  Hearing a rumor that new land will be opening up in Kansas, Pa takes the family and makes a claim.  They build a cabin, dig a well, and face a lot of excitement in the untamed land.

I love how descriptive Wilder is in the entire book.  Her passages are lyrical and make be believe I can see the vastness and beauty of the prairie.  For example, this passage:
“A hawk was sailing overhead.  It was so close that Laura saw its cruel round eye turned downward to look at her.  She saw its sharp beak and its savaged claws curled ready to pounce.   But the hawk saw nothing but Laura and Mary and round empty holes in the ground.  It sailed away, looking somewhere else for dinner.”

And this passage about wolves that have surrounded their cabin:

“Everything about him was big – his pointed ears, and his pointed mouth with the tongue hanging out, and his strong shoulders and legs, and his two paws side by side, and his tail curled around the squatting haunch.  His coat was shaggy gray and his eyes were glittering green.”

Penelope loves the story overall, but especially identifies with the little girls Mary, Laura, and Carrie.  She loves Mary because she has blond curls like herself and Carrie because she was a baby.  As a child I identified with Laura as she shared my name and shared a lot of my thoughts about life.  When I read this to my sons, they identified and loved Pa and how he spends this book constantly building things.  They loved the action sequences as well.  I think one of the secrets of why these books have remained favorites is that Wilder centers all of the action and thoughts through Laura as a little girl.  It helps children to really identify with her and the story.

Two of my favorite narrative sequences in this novel are when the family crosses the river and loses Jack at the start of their voyage.  Like Laura in the novel, this always makes me sad and it hooks the kids as well.   My other favorite part is when Mr. Edwards meets Santa Claus.  Mr. Edwards tells a great tale to the girls about meeting Santa Claus on his horse with a pack mule of presents and how he gave Laura and Mary’s presents to Mr. Edwards as he couldn’t get over the flooded river.  The girls are overjoyed by their gifts and that Mr. Edwards actually met Santa Claus.  Like Pa and Ma, I get choked up that Mr. Edwards went the extra effort and made it so the two little girls could have a happy Christmas.  Their simple gifts and the joy they had receiving them really puts to shame all that we have now in the future when it comes to Christmas.

Having read background accounts of Little House and Pioneer Girl last year, I can see the craft that went into this novel.  Laura was actually too small to remember going to Kansas as the family traveled there before she turned two from the Big Woods.  They returned to the Big Woods after Kansas and that is what Laura remembered for the novel Little House in the Big Woods.  Laura had to rely on memories of tales her family had told about living in Kansas and also visited the area as an adult to try to find where they had lived.

One part of the book that I luckily didn’t pick up on as a kid is Ma’s blatant racism when it comes to Native Americans.  This was the attitudes of people at the time and I am also glad that it wasn’t white washed from history.  I can understand why Ma is scared of the Native Americans, but I also read Pioneer Girl last year and discovered that the Ingalls actually settled in Kansas on the Osage Indian Reservation in hopes that the Indians would get kicked off their land and they could keep it.  It puts an entirely different spin on the book now.  Ma gets distressed that the Native Americans are always coming by and picking through things in the house.  . . But the house is on the Native American land!  No wonder they were upset about a new cabin being built.

This is one of Ma’s most disturbing remarks:
“Land knows, they’d never do anything with this country themselves. All they do is roam around like wild animals.  Treaties, or not treaties, the land belongs to folks that will farm it.  That’s only common sense and justice.”  Wow – Ma shows a complete lack of understanding and empathy with the Native American Way of life, but I’m sure this was typical thoughts at the time.  Luckily Pa has more empathy . . . but is still squatting on Native American land.

I’m also disturbed thinking about the vastness of the prairie back then.  The entire Ingalls family is stricken with a sickness and is saved by an African American Doctor, Dr. Tan, who is working on the Indian reservation and happens to pass by the cabin and notice the distress.  Mrs. Scott, a neighbor, comes to care for the family as “What are neighbors for but to help each other out?”  I want to know more about Dr. Tan – he is a pioneer of his own time!

Overall, Little House on the Prairie is a great classic novel that explores the trials and tribulations of pioneers in the 19th century as they explored the west.  It has beautiful descriptive language and does a great job of captivating children by telling the story through a child’s point of view.  Ma’s racism is shocking to read now, but tells the tale of complete misunderstanding of the Native American people by White Americans at that time.

Book Source:  I received my first copy of Little House on the Prairie on my 8th birthday from my Great –Grandma Kile.  Unfortunately age and much love have led to the books starting to fall apart.  I ordered a new set from Amazon.com to read with my kids.
Posted by Laura's Reviews at 9:39:00 AM