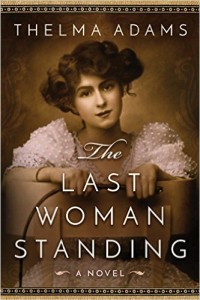 At the end of the day in Tombstone, who will be the last woman standing with Wyatt Earp?  Josephine Marcus is a young Jewish teenager in San Francisco when she runs off with a traveling show.  While on tour, she meets Johnny Behan and falls in love before returning to San Francisco.  One year later, Johnny has sent an escort with an engagement ring, Kitty, to bring Josephine back to Tombstone to become his bride.  Once in Tombstone, Josephine discovers that Johnny isn’t all that he seems.  Despite promises of marriage, he seems unwilling to actually take her to the court house and sign the papers.  She stands by her man waiting, but feels a growing attraction to the handsome, fearless and married lawmaker Wyatt Earp.  Will Johnny ever take Josephine to the alter?  Where will her feelings for Wyatt lead her and are they returned?  What is life like for a Jewish teenager in the outlaw west?  How will the rivalry between the top two lawmen in town play out with Josephine in the middle?

I had never heard of Josephine Marcus before and was fascinated by her story.  I watched Tombstone and read about it twenty years ago when I was a teenager and I haven’t really delved into the history of it since then.  I thought she was a fascinating character on many counts.  I thought it was intriguing that she was able to capture the love of two prominent men in the history of the Wild West.  I also was intrigued that she was Jewish making her way alone as a teenager in the Wild West.  I looked her up on Google when I finished the book and was intrigued to see how much is known and not known about Josephine Marcus.  Author Thelma Adams mostly took the high road and told the story that Josephine Marcus chose to tell at the end of her life, although she probably wouldn’t want it to be mentioned that she bedded anyone before marriage.  Josephine may have also been a soiled dove, but history will never know at this point for sure.

I’ll admit I was shocked by the first page and how bold Josephine was with her sexuality.  As I read through the book, I understood that it was because that was the power that Josephine had.  Why were all of these men attracted to her?  It was all because she was the most beautiful woman in town and exuded a lively sexuality. She was able to make her way independently in the world with this power, but it also provided times that she was in trouble as well. The story seemed to turn more about Wyatt Earp toward the end of the novel instead of Josephine.  I wish that it would have gone on longer and really told the story of Wyatt Earp and Josephine’s amazing life together after they finally ended up together.

My favorite quotes:
“Let’s face it:  aging is a bitch for everybody.”

“Fox eyes flashed.  An owl hooted.  I gazed at the stars, gradually making out the Big Dipper, the plants Venus and Mars, fat Orion’s belt.  I awaited a wishing star, only to realize that this was my wish:  serenity – without Kitty’s chatter or Mama’s judgements or the pressures of an arranged marriage – was what I desired.”

“When I think back, I know I didn’t run away from home.  I ran to Wyatt.  He caught me, not because I was some lost sheep but because he needed who I was as much as I needed him.  When the smoke cleared in Tombstone – he ran to me.”

Overall, The Last Woman Standing is a unique and interesting look into the fascinating life of Josephine Marcus, and the rowdy outlaw new town of Tombstone.

Book Source:  Review Copy for being a part of the TLC Book Tours.

One lucky winner will receive a copy of  The Last Woman Standing by Thelma Adams.  If you would like to win The Last Woman Standing, please leave a comment on why it sounds interesting.
As part of your comment, you must include an email address. If I can't find a way to contact you I will draw another winner.
For an additional entry, blog about this giveaway or post it on your sidebar. Provide a link to this post in your comment.

I will be using random.org (or a Monte Carlo simulation in excel) to pick the winners from the comments.
This contest is only open to addresses in the United States
The deadline for entry is midnight on Friday July 22nd!
Please make sure to check the week of July 25th to see if you are a winner. I send emails to the winner, but lately I've been put in their "junk mail" folder instead of their inbox.
Good luck!