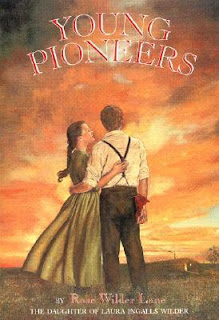 Young Pioneers is the tale of a brave young couple, Molly and David, who travel west to find a homestead of their home after their marriage.  They are only 18 and 16 years old at the time.  Molly in particular is a brave young woman who not only gives birth on the prairie with only her husband in attendance, but also manages to live alone and keep the homestead when David has to get work out east after a grasshopper plague.  “In the daylight she saw the devastated country more clearly.  There was nothing but bare earth to the rim of the sky.”    I was amazed by her pluck and determination against all odds.

Lane gives great characterization and setting.  You feel through Molly’s eyes what it would be like to be alone on the prairie and the courage required by pioneers. I loved this description:

“This was a cloud ineffably beautiful, soft as moonbeams, iridescent as mother of pearl.  It covered the sun, and the sun shone through it gently with kindness.”

Lane also talks a lot about the gumption of the pioneers.  The pioneers who made it were tough and had that gumption, those that didn’t make it, lacked it.

“Suddenly she was happy, because she understood why he hadn’t come to her for comfort.  It was his pride- his pride in taking care of her and the baby.  She would love him just as much if he couldn’t take care of her.  But she wouldn’t love him at all without the pride; he wouldn’t be David without it.”

This was about a neighbor of Molly and David:
“It was not only this quarter section of land that Mr. Svenson was giving up; it was a year of his life, a year’s work and hope.  Molly doubted that Mr. Svenson would ever be more than a hired man.”

Rose Wilder Lane was a famous author before her mother, Laura Ingalls Wilder.  She greatly helped her mother with her works, but also took the material to write her own stories including this novel.  It had many elements similar to On the Banks of Plum Creek and The Long Winter.

Young Pioneers was a bit scattered at the beginning and not as detailed as I would have like to really set up the story. It got much better with more description as the book went on until it got to the point that I was enthralled by the story and read through it quickly to see how it ended.  Overall, it is a good story for those interested in history, especially of the pioneer era.  It is also an interesting book for Little House fans to read as well.

Can you see yourself able to live alone on the prairie with only an infant through a winter of blizzards?

Book Source:  I purchased this novel at the Laura Ingalls Wilder Museum in Walnut Grove Minnesota.  Stay tuned for a blog post about my journey!
Posted by Laura's Reviews at 3:22:00 PM