If Beale Street Could Talk by James Baldwin 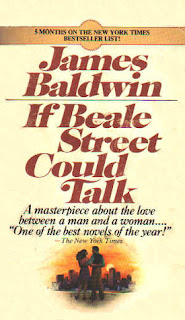 I first heard of James Baldwin back in American Literature class in high school and college.  I remember enjoying his short stories and so I picked up a used copy of If Beale Street Could talk quite a while ago.  Luckily the Classics Club has finally led me to pick up this book from my to-read shelf and read it.  I like that on that front it says it is a masterpiece about the love between a man and a woman . . . “One of the best novels of the year!” by the New York Times.

This novel was published in 1974, but besides the language (“Can you dig it?” and calling people “Cats” figures heavily in the lingo) the story could have been about 2018.  It’s deeply disturbing to me that the topic of racial inequality and the targeting of African Americans by law enforcement should feel so relevant forty years after the book was written.

Fonny and Tish grew up together in the same neighborhood in New York City.  At first, they were enemies, then friends, then they eventually became lovers.  Ready to get married, the two look for a place to live until one-night Fonny is arrested for a rape he didn’t commit.  As their two families work together, will they be able to get Fonny out of jail before Tish has their baby?

I enjoyed reading this novel.  It had a deep despair about the ill treatment of African Americans in the United States and the work they have to do when they live with “guilty until proven innocent”.  I was struck how Fonny had an alibi, but he was the only African American man put in the lineup so the woman picked him as she had been raped by an African American.  Fonny’s alibi is jailed so he can’t speak and then the rape victim disappeared to Puerto Rico.  Meanwhile Fonny is still stuck in jail in a bad situation trying not to lose his spirit.  What can you do when innocent until proven guilty does not apply to you?

I’ll admit I take one star off of my rating because of the ending, which was not an ending.  I rate this a Grapes of Wrath type ending or the type of ending that causes me to throw a book across the room.  I spent the whole book as a page turner trying to figure out if Fonny will get out of jail or not . . . and then the book just ends.  Did Fonny get out of jail?  Who knows!  Did Tish have their baby?  We also don’t know!  Argh!!!  I found it so frustrating.

I’ll admit though that I was leaning toward the ending being that Fonny died in jail. He was put in jail because he did bow down to the man and he was getting beaten and probably worse in jail the last few times Tish saw him.  I thought because he was strong and not going to give up, he would end up dead.  His father dies at the end after despair at losing his job for stealing and not being able to get Fonny out of jail . . . but it’s unknown what happened to Fonny.  I’m still upset about this ending – can you tell?

What endings of books have driven you crazy?

“They know exactly when the flesh is ready, when the spirit cannot fight back.  The poor are always crossing the Sahara.  And the lawyers and bondsmen and all that crowd circle around the poor, exactly like vultures.”

“It’s funny what you hold on to to get through terror when terror surrounds you.”

“The same passion which saved Fonny got him into trouble, and put him in jail.  For, you see, he had found his center, his own center, inside him:  and it showed.  He wasn’t anybody’s nigger.  And that’s a crime, this is fucking free country.  You’re supposed to be somebody’s nigger.  And if you’re nobody’s nigger, you’re a bad nigger:  and that’s what the cops decided when Fonny moved downtown.”

“Maybe I’d feel different if I had done something and got caught.  But I didn’t do nothing.   They were just playing with me, man, because they could.”

“One of the most terrible, most mysterious things about a life is that a warning can be heeded in retrospect:  too late.”

Overall, If Beale Street Could Talk is a sadly topical book about the love between and a man and a woman and the struggle African Americans face in this country.  I found it to be a page turner and it really made me think.  I enjoyed it . . . except for the ending.

Book Source:  Purchased at a used book sale long ago.
Posted by Laura's Reviews at 1:23:00 PM