In the Midst of Winter by Isabel Allende 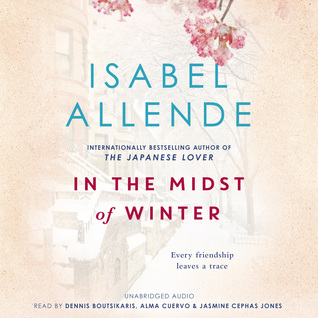 Richard is a professor in his 60’s who is set in his ways and is patiently riding out a large blizzard in New York City.  When he is involved in a minor car accident with a young woman, Evelyn, who he believes only speaks Spanish, he brings his tenant Lucia up from her apartment to help.  They both discover that Evelyn can speak English . . . and that she has a dead body in her trunk.  Evelyn is an undocumented migrant who left brutal violence in her native Guatemala for a better life in the United States.  If they call the police, Evelyn may be deported.  What will the three do?  Who is the dead body and why were they killed?

I like that the story involved is at its heart a love story between Richard and Lucia.  They are both in their 60’s and in the “midst of winter.”  They have both had romantic disappointments in life, are they ready for a new spring?

I also really enjoyed the background story of each character.  In particular I was intrigued by the story of Evelyn’s journey to America and escape from the brutality in Guatemala.  It really made me appreciate what young immigrants have to go through to survive.  Lucia’s story in Chile and the history of brutality in that country was fascinating and disturbing as well.  Richard had an interesting back story involving tragedy and his own ill behavior.  I’ll admit to liking him less once I knew his story.

In this book all three characters are narrators of different sections.  I enjoy that the audiobook uses three different narrators to read these sections and give a unique voice to each of the characters.  It made the book a very enjoyable listening experience.

I also really loved how the book delved into the hot topic of immigration and gave face and story to an illegal immigrant.  Besides showing why Evelyn would want to migrate here, it also showed what a mess the immigration system is for anyone trying to get into the country. The story gave a lot of food for thought on current political topic.

“He was so unfamiliar with this peaceful sense of happiness he did not even recognize it.”

“Her body was growing old, but inside she still kept intact the adolescent she once was.”

Overall, In the Midst of Winter is a mystery, romance, and story of three unlikely people coming together to help each other and change their futures.
Posted by Laura's Reviews at 9:29:00 PM