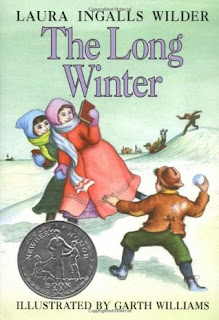 Free land for the taking without a tree to clear – this temptation started the last great migration west where many a person left everything they knew for the “free” land.  Charles “Pa” Ingalls was always yearning to move westward to find that perfect land that would provide his small family with security.  In By the Shores of Silver Lake, after years of grasshopper plagues in Minnesota, Pa took a job with the railroad and then staked a claim on prime land located near DeSmet South Dakota.  After a great first summer on the land, in The Long Winter, the Ingalls family must survive a winter that no settler had seen before, near constant blizzards from October until May.

After dire warnings from nature and a wise Native American, Pa moves the family to town to make it through the winter.  He is glad he did as the winter is fiercer than anyone could imagine.  Without trains coming to DeSmet, the town runs out of food and supplies to burn for fuel.  The Ingalls family is forced to burn twisted hay and to grind wheat in a coffee grinder to make a basic bread.  As the town slowly starts to starve, young Almanzo Wilder and Cap Garland decide to risk heading to a claim that is rumored to have wheat to save the entire town.  Will they make it back before the next blizzard hits?

The Almanzo and Cap wheat rescue is a very intense and exciting scene.  I was reading it to my seven-year-old daughter Penelope, but my nine-year-old son Daniel could hear me from the adjoining bathroom where he was taking a bath and he had to come out and join us, so he could find out what would happen.  Reading this as an adult, it is amazing to realize just how close the Ingalls and entire town came to starving to death during these blizzards.  Wilder masterfully writes the small details just as the Wilder brothers noticing how skinny Pa is getting and how the family is struggling to make it on potatoes and wheat.    They are very grateful for the small things, like having tea to drink.

I had read lately that The Long Winter is Wilder’s masterpiece and I would agree.  At this point in the series, she has fine-tuned her writing style and has beautiful passages about the snow and the hardships faced.  She doesn’t sugar coat what is happening.  I just finished reading The Children’s Blizzard by David Laskin (review to come shortly) and he stated that The Long Winter is accurate per other accounts from pioneers living in Dakota at the time and describes that experience in precise detail.

We visited DeSmet as a family this past summer.  I loved camping on the Ingalls family homestead and it really made the story come alive when we were reading it to know where everything was at and what it looked like.  I can’t imagine living in the claim shanty and can see why they moved to town.  It gave me an even greater appreciation for the settlers that came before us and had to make it through some very tough times to survive.

I also must admit that that while I loved the beauty of the writing and the struggles of the protagonist, Penelope did not enjoy the novel as much as she had the previous books in the series.  I think she more enjoys the interactions between the characters, especially when they go to school and she is really looking forward to romance between Almanzo and Laura.  Hopefully Little Town on the Prairie meets her expectations.

Favorite Quotes (I had a lot in this book!):

“It was wonderful to be there, safe at home, sheltered from the winds and the cold.  Laura thought this must be a little bit like Heaven, where the weary are at rest.”

“Brains and character did not depend on anything but the man himself.  Some men did not have the sense at sixty that some had at sixteen.”

“The politicians are a-swarming in already, and ma’am if’n there’s any worst pest than grasshoppers it surely is politicians.”

“A lamp could shine out through the blackest darkness and a shout could be heard a long way, but no light and no cry could reach through a storm that had wild voices and an unnatural light of its own.”
“Work comes before pleasure.”

“He went to the windows but he could not see out.  Snow came on the wind from the sky.  Snow rose from the hard drifts as the wind cut them away.  It all met in the whirling air and swirled madly.  The sky, the sunshine, the town, were gone, lost in that blinding dance of snow.  The house was alone again.”

“Laura thought of the lost and lonely houses, each one alone and blind and cowering in the fury of the storm.  There were houses in town, but no even a light from one of them could reach each another.  And the town was all alone on the frozen, endless prairie, where snow drifted, and winds howled, and the whirling blizzard put out the stars and the sun.”

“’I am not afraid of the dark,’ she said to herself over and over, but she felt that the dark would catch her with claws and teeth if it could hear her move or breathe.  Inside the walls, under the roof where the nails were clumps of frost, even under the covers where she huddled, the dark was crouched and listening.”

“Next day was exactly the same.  The stillness and the dusk and the warmth seemed to be a changeless dream going on forever the same, like the clock’s ticking.”

“The sun was rising.  The sky was a thin, cold blue and the earth to its far horizon was covered with snowdrifts, flushed pink and faintly shadowed with blue.”

“There was something mocking in the glitter of that trackless sea where every shadow moved a little and the blown snow spray confused the eyes searching for lost landmarks.”

“And as they sang, the fear and the suffering of the long winter seemed to rise like a dark cloud and float away on the music.  Spring had come.  The sun was shining warm, the winds were soft, and the green grass growing.”

Overall, The Long Winter is a masterpiece of fiction that tells the experiences faced by the settlers in the Dakotas during the long hard winter of 1880-81.  Wilder has come into her own with her writing in this one, and the sequence where Almanzo and Cap try to outrun a storm to save the town is riveting.  If you’ve never read this as an adult, I highly recommend it.

Book Source:  I purchased the series from Amazon.com as my childhood set from my Great-Grandpa and Grandma Kile is falling apart.  I didn’t want to destroy them on the reread.  I loved reading these books with my Great-Grandma as a child and love reading them to Penelope now.