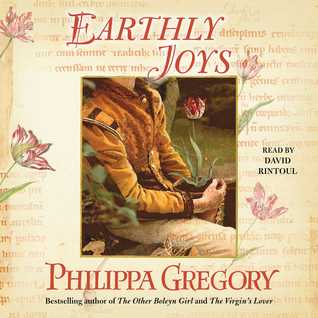 John Trandescant is the gardener for Lord Robert Cecil, Queen Elizabeth I’s trusted advisor.  John takes great pleasure in creating and maintaining beautiful gardens and likes being a man that Earl Cecil is trust.   After Queen Elizabeth’s death, James I of Scotland comes to rule over England.  What changes will he make?  John may not always agree with how things are run, but he knows his place in the proper order of the world.  John marries, has a son, and continues his adventures around the world looking for perfect plant specimens.  After Lord Cecil’s death, he goes through a series of new masters until one, Lord Buckingham, changes his life forever.  Will John be able to continue with his life as he has lived it for the previous sixty years?

I really enjoyed this book, except for my one woe with the story line in the spoiler below.  I really loved seeing this time period through a gardener’s eyes.  I thought it was wonderful that he was in fact a real person and a famous gardener.  I love the description of the amazing gardens that he put together and the plants he discovered around the world.  I also loved the descriptions of the tulip speculation in Holland.

I really like how John’s story and that of his family paralleled British history at the time.  John is loyal to his master and his King, but his faith is shattered after going to war and seeing the mistakes that his master makes that kill innocent men.  Do the lords and kings of England deserve the blind love and devotion of the people?  The novel builds toward the English Civil war but ends before its start.  I literally scream “NOOOOOOO!” when this audiobook ended as I wanted to learn more about the next generation of the Trandescant family and where history would take them.  I was excited to see there is another book after this one and I can’t wait until it is out on audiobook.

SPOILER ALERT
I had a hard time with John and Lord Buckingham’s relationship.  On one hand, John seemed to scorn the lifestyle at court, but then the book implies that Lord Buckingham was John’s one true love.  That seemed strange to me as one of the best parts of the book to me was John realizing he has been used by Buckingham on the boat after the great defeat to show that Buckingham still had someone who loved him. Then after their return to England, Buckingham carelessly threw him aside.  This represented how the nobility used the working class and did not care about them.
SPOILER END

David Rintoul is a fabulous narrator.  He had a unique voice for each character and acted out the parts.  I really appreciate and enjoy that in an audiobook narrator.

Overall, Earthly Joys was a riveting novel set during the Stuart era in England starring a gardener who was a great man during a fascinating time in history.
Posted by Laura's Reviews at 5:00:00 PM