Summer of Scandal (Dare to Defy #2) by Syrie James 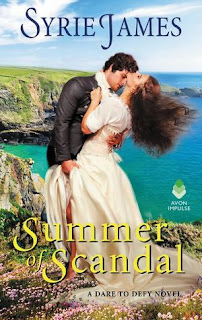 I have greatly enjoyed Syrie James’s historical fiction novels in the past and I loved her foray into romance, Runaway Heiress this summer.  I was delighted to be able to review Summer of Scandal, the follow up to Runaway Heiress and second novel in the Dare to Defy Series.

Madeleine Atherton’s mother has one goal in mind, to marry her three wealthy American daughters off to English nobility.  After her first daughter’s successful marriage, she is working on getting her second daughter, Madeleine married.  Madeleine has received a proposal from an heir to a Dukedom, and her mother can’t be more thrilled.  Madeleine finds herself unable to give a positive answer and heads to Cornwall to visit her sister.  Unfortunately, her sister is out of town, but she meets an acquaintance Charles Grayson, the Earl of Saunders, on the train.  Charles is a friend of her brother-in-law.  He offers to let Madeleine stay with his family at Trevelyan Manor until her sister’s return.

Madeleine has a good time visiting Trevelyan Manor and the Grayson family.  She especially gets along with Sophie, the cousin of Charles whom the entire family expects him to marry.  Madeleine is a college educated woman who dreams of being an author.  She is working on her novel while at Trevelyan Manor.  Charles has a secret of his own in that he loves to work on inventions, much to his father’s dismay.  The two become friends and soon can’t deny an attraction between them, but they both don’t want to hurt Sophie.  Will true love prevail?

I loved how Madeleine and Charles both question their destiny.  As part of American and English elite respectively, they are expected not to work outside of their duties, but they both have dreams of doing something else.  They were equally matched that way.  Their romance built slow but was a good one.

I can’t wait to meet the third Atherton sister, Kathryn in the final novel in this series which is due to be released next summer.

Overall, Summer of Scandal is a Victorian Romance with great characters set during the American invasion of heiresses seeking to secure an English title.  It was a good read.