The Women of the Copper Country by Mary Doria Russell 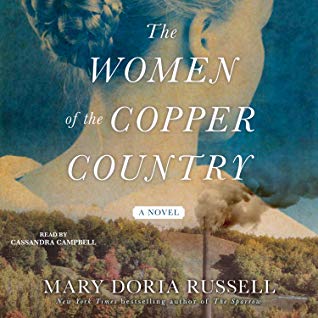 Where is the Copper Country? It’s located on a peninsula nestled in the depths of Lake Superior on the Northwest end of the Michigan’s Upper Peninsula.  It is one of most beautiful places you have ever seen and is often referred to as “God’s Country.”   In the later half of the 19th century and the start of the 20th century, it was a bustling mining community and one of the wealthiest places in the world.

As in many places, the wealth did not trickle down to the miners themselves, but stayed on the top.  While those that owned the mines out east made millions, and those that ran the mines in the Copper Country lived in giant mansions, the company controlled the housing and lives of those that worked the mines.  As anger started to simmer, the workers started a strike that would change all of their lives.

I lived in the Copper Country for six years while I attending Michigan Technological University earning my Bachelor and Masters of Science degrees in Environmental Engineering. I was fascinated by the history and took the class, “Copper Country History” that was taught by one of my favorite professors, Larry Lankton.  I tried to take every class of his that I could.  I was also fascinated by the local history as my Great-Uncle Fred gave me a book of genealogy when I went to college that showed that some of my ancestors had come from Germany to the Copper Country and lived in the area for around fifty years before their descendants moved to the Detroit area as the auto industry started to boom.  My ancestors were not miners, but ran a bar that served the miners in Houghton.  I was very excited to have the opportunity to review this audiobook as I’ve long thought the story of the strike of 1913 was a fascinating story that should be a book or movie.

Author Russell tells the story of the strike through the eyes of real heroine “Big Annie” Klobuchar Clemenc and fictional heroine, the young teenage Eva Sawicki.  Eva is an orphan who has a girlhood crush on Jack, a young boy who just lost his father in a mining accident.  Eva becomes involved in the strike of the workers wanting an eight-hour work day, better wages, and safer working conditions. She works with Big Annie.  Big Annie is a woman that is over six feet tall that was married to an abusive mine worker.  She has no children and puts all of her energy into helping the strike through the women’s auxiliary.  She is the only person big enough to carry the giant American flag the strikers use and quickly becomes the face of the strike in the media.  Mine general manager and president James MacNaughton knows he will not meet the demands of the workers and will break the strike through any means possible.  How will the strike end?

June 17th, 1980 was the first Annie Clemenc day in Michigan and she apparently has a statue at the Michigan State Capital.  I want to see it someday!  She is a real inspiration and has a fascinating story.  Unfortunately, this novel fell short telling her story.  I felt that instead of focusing on the real and fascinating story, the novel romanticized Annie and Eva’s stories and focused instead on their fictional love lives.  To this point, each chapter had a Romeo and Juliet quote to start it, which I really thought was out of place.  The story often left the characters to deep dive into history.  The worst example of this was during the Italian Hall disaster.  None of the main characters in the novel were involved in this story in the book and indeed we didn’t get back to their viewpoint until well after the disaster.  I should have felt much more emotion during this traumatic scene, but I didn’t.  Instead it was a history lesson for the disaster instead of a novel.  It was very hard to emotionally connect to the characters in this novel.  MacNaughton was a cartoon villain in the novel, I kept waiting for him to twirl his mustache.  I was annoyed, but the author’s note at the end pointed out that according to his writings, he really was that bad.

There were discrepancies in the novel that didn’t match the real area.  Case in point at the beginning of the novel, Annie takes a hot air balloon ride and sees the “cornfields” around Houghton. There are no corn fields and there never were – the only crop they can really grow up there is potatoes.  There were other items like this.  The worst to me was the narrator of the audiobook.  She did a fair job of narrating, but could not pronounce pasty or Houghton correctly.  Not pronouncing pasty correct to someone who has lived or currently lives in the UP is like fingernails scratching across a chalk board.  I cringed every time the narrator said it.  I’m not sure why she didn’t look it up.  I found the pronunciation on YouTube easily.  A pasty is a tasty Cornish miner’s meat pie.  My family love them and we eat them almost weekly.

I loved the author’s note at the end of the novel that gave the thank-you to my professor Larry Lankton and to Michigan Tech as they wrote a grant to underwrite her research.  If you would like to learn about this fascinating part of history, I highly recommend watching the PBS documentary Red Metal, listening to the Woody Guthrie song 1913 Massacre, or reading Larry’s Lankton’s non-fiction books Cradle to Grave and Beyond the Boundaries.

Overall, the Woman of the Copper Country tries to bring a fascinating and little-known part of American history to life, but it falls short in my opinion.
Posted by Laura's Reviews at 11:12:00 AM