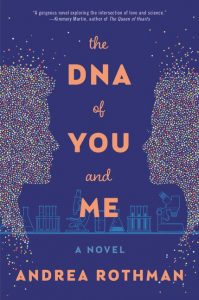 I couldn’t stop reading this one-night last week and stayed up too late to finish it.  What a story!

Emily Apell is a research scientist who is receiving a major award for her research.  Receiving this award has made her think about the path that started her towards this goal and she goes to visit her old mentor Justin McKinnon’s research lab.  She finds it dismantled and being made into a new lab for a new scientist.  She thinks back to when she first came to the lab as a young scientist and met fellow researcher Aeden.  He was working toward the same goal of trying to find the gene that maps the sense of smell.  They are set up as rivals at first, but they feel an undeniable attraction.  Emily has always had a hard time connecting with people, but feels a connection with Aeden unlike any other she’s ever had in her life.  Will she choose love or science?  What will cause her to make her final decision?

I really loved the science background of this novel.  I’m an engineer and have worked in science labs.  It was very interesting.  I also related to Emily and her struggle on whether to go with her love with Aeden or her passion for her career.  To be honest, as a woman in engineering, you are faced with this choice.  Choosing to get married and have kids does put your career on the backburner.  The women who are higher up in my field are often unmarried and/or childless and are able to devote their life to their careers.  If you as a woman want to have a life outside of your career, you have to realize you are most likely not going to be able to at the top of the engineering profession. I think things are slowly changing over time.

I was surprised and torn by what actually happened between Emily and Aeden and the ending.  It was riveting.

“To wish him luck was a mistake, because I hadn’t really meant it, and because at the end of the day science has nothing to do with luck, but with truth, and the truth does not always make one happy.”

“I get to wondering if there’s a single place each one of us is meant to arrive at or if there is no such place, and destiny does not exist:  we simply make our way as we go along.”

Overall, The DNA of You and Me was a riveting novel about one woman’s choice between career or love.

Book Source:  Review Copy as part of the TLC Blog Tour.  Thank-you!  For more stops on this tour, check out this link.

About The DNA of You and Me

A powerful debut novel—a wonderfully engaging infusion of Lab Girl, The Assistants, and Eleanor Oliphant Is Completely Fine—that pits the ambition of scientific discovery against the siren call of love.

Emily Apell arrives in Justin McKinnon’s renowned research lab with the single-minded goal of making a breakthrough discovery. But a colleague in the lab, Aeden Doherty, has been working on a similar topic, and his findings threaten to compete with her research.

To Emily’s surprise, her rational mind is unsettled by Aeden, and when they end up working together their animosity turns to physical passion, followed by love. Emily eventually allows herself to envision a future with Aeden, but when he decides to leave the lab it becomes clear to her that she must make a choice. It is only years later, when she is about to receive a prestigious award for the work they did together, that Emily is able to unravel everything that happened between them.

A sharp, relevant novel that speaks to the ambitions and desires of modern women, The DNA of You and Me explores the evergreen question of career versus family, the irrational sensibility of love, and whether one can be a loner without a diagnostic label. 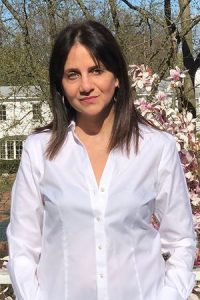 Andrea Rothman was born in Brooklyn NY and raised in Caracas, Venezuela. Her debut novel, THE DNA OF YOU AND ME, was published by William Morrow-HarperCollins in March of 2019. The novel has received starred reviews from Publisher’s Weekly and Library Journal, and won an award for Best Popular Fiction in English at the 21st International Latino Book Awards in Los Angeles.

Prior to being a fiction writer, Rothman was a research scientist at the Rockefeller University in New York, where she studied the sense of smell. She holds an MFA in writing from Vermont College of Fine Arts and was a fiction editor for the VCFA journal of the arts-Hunger Mountain.

Her essays and short stories have appeared in print and online journals such as Literary Hub, Lablit, Cleaver Magazine, and Litro Magazine among others, and can be viewed at www.andrearothman.com.

Rothman lives with her husband and two children in Long Island, New York. She is at work on a second novel. Connect with Rothman on Instagram, Twitter, and Facebook.
Posted by Laura's Reviews at 6:21:00 PM