Stories to Tell by Richard Marx 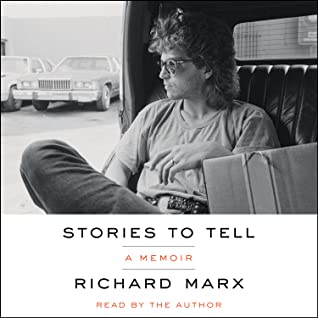 What musician would you like to read a memoir about?

I can’t say enough how much I LOVED this memoir.  Stories to Tell is narrated by the author Richard Marx himself and it comes across as a deeply personal narrative that is filled with humor and grace.

I’ll admit that I didn’t know much about Richard Marx when I started this audiobook.  I remember that I enjoyed listening to his music in my youth.  I was amazed to learn that not only was Richard Marx a hit singer, but he is also a prolific song writer.  He has had fourteen number one hits and has a number 1 song in each of four decades.  Wow!!

In Stories to Tell, Marx details he life and growing up in the industry.  His father was a jingle writer and his mother as a backup singer.  Marx was discovered by Lionel Richie and moved from Chicago to LA to sing on Riche’s record.  He sang and wrote songs for others including Kenny Rogers before having a hit record of his own.

I loved that Marx detailed the writing process and how he wrote his hit songs.  I was intrigued by the entire process and loved when he would spontaneously break into song on the audiobook.  I ended up stopping the audiobook often and finding the songs on my Amazon music to listen too.  I read online that there is a companion album to go with the book and I need to find it!

Marx has a lot of great stories.  He was funny and came across as a very down to earth kind of guy.  I appreciate that he kept his first marriage and divorce private.  Some of the stories of touring were crazy sometimes including a bit with gangsters in Taiwan.  I loved listening to this audiobook.

Overall, Stories to Tell is a humorous and entertaining story of Richard Marx’s journey through life and fame.