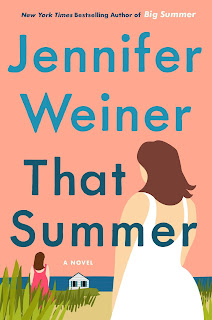 Daisy Shoemaker has it all.  A thriving cooking business, an independent teenage daughter, a successful lawyer husband, and a beautiful house.  Yet, she feels discontented.  She dropped out of college to marry her husband Hal and starts to wonder if she should have finished her degree and had more independence before she was married. Her daughter Beatrice has started to rebel and has been kicked out of her fancy boarding school.

Daisy starts to receive emails that are meant for Diana Starling who shares a similar email address.  She meets Diana and is happy to find a friend.  Diana though has a secret of her own.  When she was fifteen years old, she spent the summer at Cape Cod as a babysitter.  She had a wonderful summer and met a special boy.  Unfortunately, her summer ends with a violent rape.  Now as an adult, she has decided to track down her assailants.  What does Daisy have to do with this situation and when will she find out the truth?

That Summer is a very timely book that deals with the “Me Too” movement and how sexual assault effects not only those assaulted, but those that are involved in the assault.  It was sad.  This is definitely not a light beach read, but it was a very good book.  I loved the characters and their journeys.  My only complaint is that I wanted more character development for Hal.  He had turned a new leaf in his life, and I wanted to know more about that from his perspective.  I do believe that people can change for the better.

“Talking to Beatrice about privilege was like trying to explain water to a fish.”

Overall, That Summer is a riveting drama that shows all sides of the “Me Too” movement.