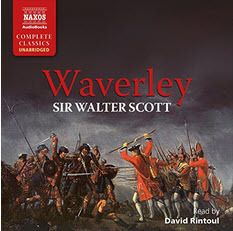 I started to read this as a novel, but realized I needed an audiobook to help with the “old fashioned” language.  Switching to audio really helped out. Even better David Rintoul was the narrator.  He played Mr. Darcy in the 1980 Pride and Prejudice adaptation.  He had a great voice for audio.

Waverly is credited as being the first historical fiction novel.  The subtitle is “’Tis Sixty Years Since” and it is set during the Jacobite uprising of 1745.  If you are an Outlander fan, this should be a familiar setting.  Edward Waverly is the heir to an estate through his uncle.  He has decided to join the army right before the Jacobite uprising.  He is stationed in Scotland and travels through the country on the way to his post.   Through a series of misunderstandings, he loses his commission in the army and finds himself amongst the rebellion.  He even meets Bonnie Prince Charlie.  He also meets two beautiful, but very different women, Anne and Flora.  Which one will he choose and how will he survive the uprising?

This book was very popular in its day.  I think the romance, adventure, and uniqueness drew people to the novel.  I found it difficult to keep my interest in as the story rambled and went off into areas that were not important for the plot.  Edward Waverly, was a poor hero.  He didn’t stand for any one cause and just seemed to float through the novel observing the action and heroics of others.  This was Sir Walter Scott’s first novel.  Does his writing style get better in his later famous works Ivanhoe and Rob Roy?  Unfortunately, none of the other book club members could get into this book.  I think it’s lucky I switched to audio.