Inside the O’Briens by Lisa Genova 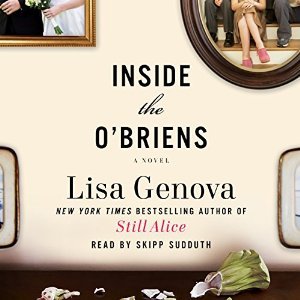 Inside the O’Briens lurks a hidden lethal genetic neurodegenerative diseases in their DNA.  Joe O’Brien is a proud Boston Police Officer.  He married Rosie, the love of his life at 18 and they had four kids in quick succession.  Now at 43, his kids are adults, but they live in apartments in their three story townhouse and all share Sunday dinner together.  Joe starts acting strange including temper outburst, involuntary movements, and problems with writing his police reports.  People think he’s drunk; after all, his mother Ruth was a drunk who died young.  After being confronted by his friends and Rosie, Joe goes to the doctor and discovers after testing that he has Huntington’s disease.  And worse, each of his children has a fifty percent chance of getting the disease.  Inside the O’Briens details Joe’s journey and the hard realities of learning to live with this disease.  It also goes into the viewpoint of Joe’s daughter Katie, a yoga instructor.  She also has to make the decision to get tested and what she should do with her life.  Joe has to show his entire family how to life with Huntington’s disease.

This book was very powerful.  The entire O’Brien family was written to be believable and real people.  I felt like I was a part of the family and I felt their pain.  Lisa Genova not only wrote believably real characters, and family dynamics, but she also did a great job of introducing the disease and how it could impact an entire family and the reality of living with it.  I not only enjoyed this book and getting to know this family, but I learned a lot about Huntington’s disease.  I also thought it was moving when Joe was able to piece together what he remembered of his mother and how after believing she had died an alcoholic, he finally realized she had died of Huntington’s disease and loved him all along.  This part of the story brought me to tears.
Skipp Sudduth had a great voice and sounded like a 43 year old Boston Cop.  It was a great book to listen to and kept me intrigued throughout.  I just felt like I was left hanging a bit at the end.  I understand why the author ended the book the way she did, but I felt like I really wanted to know the answer!

Overall, Inside the O’Briens is a moving audiobook about the reality of a genetic disease hitting a member of a family and the repercussions throughout the family.  It also was a great story of an Irish Catholic family in Boston and how life is changing with the times. I highly recommend this book.  It would also make a great book club book as there is so much to discuss in this novel.
Posted by Laura's Reviews at 5:44:00 PM