I am very pleased and excited to be a park of the Ross Poldark Blog Tour!   I am enjoying the new series on Masterpiece Theatre, but I am also loving the novel Ross Poldark by Winston Graham.  Stop by my blog next week on July 20th for my review of Ross Poldark and on July 27th for my review of Demelza.  If you love historical fiction, romance, adventure, or a great story, you will love this series.

“If Jane Austen met Charlotte Bronte and they drank too much port, the Poldark Saga would be their literary love child.” — Poldarkian.com

In celebration, July 6th through August 3rd, The Ross Poldark Blog Tour will visit thirty popular book blogs specializing in historical, romance and Austenesque fiction. Featuring spotlights, previews, excerpts and book reviews of these two acclaimed historical fiction novels, the tour will also offer readers a chance at a fabulous giveaway contest including copies of the books and a stunning Anglophile-themed prize package. 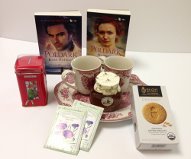 In celebration of the re-release of Ross Poldark and Demelza, Sourcebooks Landmark is offering three chances to win copies of the books or a grand prize, an Anglophile-themed gift package.

Two lucky winners will each receive one trade paperback copy of Ross Poldark and Demelza, and one grand prize winner will receive a prize package containing the following items:

To enter the giveaway contest simply leave a comment on any or all of the blogstops on the Ross Poldark Blog Tour starting July 06, 2015 through 11:59 pm PT, August 10, 2015. Winners will be drawn at random from all of the entrants and announced on the Buzz at Sourcebooks blog on August 13, 2015. Winners have until August 20, 2015 to claim their prize. The giveaway contest is open to US residents and the prizes will be shipped to US addresses. Good luck to all!

In the first novel in Winston Graham’s hit series, a weary Ross Poldark returns to England from war, looking forward to a joyful homecoming with his beloved Elizabeth. But instead he discovers his father has died, his home is overrun by livestock and drunken servants, and Elizabeth—believing Ross to be dead—is now engaged to his cousin. Ross has no choice but to start his life anew.

Thus begins the Poldark series, a heartwarming, gripping saga set in the windswept landscape of Cornwall. With an unforgettable cast of characters that spans loves, lives, and generations, this extraordinary masterwork from Winston Graham is a story you will never forget.

In the enchanting second novel in Winston Graham’s beloved Poldark series, Demelza Carne, an impoverished miner’s daughter Ross Poldark rescued from a fairground brawl, now happily finds herself his wife. But the events of these turbulent years test their marriage and their love. As Ross launches into a bitter struggle for the right of the mining communities, Demelza’s efforts to adapt to the ways of the gentry (and her husband) place her in increasingly odd and embarrassing situations. When tragedy strikes and sows the seeds of an enduring rivalry between Ross and the powerful George Warleggan, will Demelza manage to bridge their differences before they destroy her and her husband’s chance at happiness?

Against the stunning backdrop of eighteenth century Cornwall, Demelza sweeps readers into one of the greatest love stories of all time.

Winston Graham (1908-2003) is the author of forty novels. His books have been widely translated and the Poldark series has been developed into two television series, shown in 22 countries. Six of Winston Graham's books have been filmed for the big screen, the most notable being Marnie, directed by Alfred Hitchcock. Winston Graham is a Fellow of the Royal Society of Literature and in 1983 was awarded the O.B.E.