From the Earth to the Moon by Jules Verne 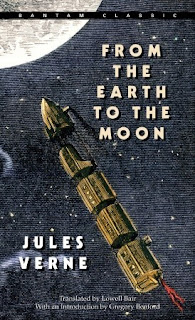 After the Civil War, the Baltimore Gun Club decides to build a cannon that is large enough to launch a ship to the moon.  The leader of this project, Barbicane, soon finds himself pitted against his archrival Captain Nicholl, who is sure such a cannon can’t be built or fired, and the space race is officially started.

My son Kile and I have read a few of Jules Verne’s classics over the past few years in the Children’s Illustrated Classics format.  From the Earth to the Moon was the first time that I had read a Verne novel that wasn’t adapted for children.  It is translated from Verne’s native French, but there was much more detail than I am used to in the children’s versions.

I was inspired to read this novel after visiting the Kalamazoo Air Zoo last summer and discovering that Verne was the inspiration for the space program.  Indeed as I read through the book I was amazed that an author writing shortly after the Civil War could get so many of the details right for what would follow 100-years later.

I can’t believe how much Verne got right including that the launch point would be Florida or Texas, there would be a launch that would land in the ocean, the shape of the projectile, and that animals would be launched first.  It was strange though that the launch was from a cannon and that the astronauts thought there would be atmosphere on the moon to breath.  They planned for air in their ship, water, and food, but as an environmental engineer, I really wanted to know what happened to their waste!

Verne really used science in his science fiction and I found much of it fascinating. I admit, the language did get a bit stodgy for me at times, but I thought the ending was a great cliff hanger.  I’ve had to order Around the Moon as I MUST learn what will happen next.

I loved this quote on the first page as an engineer:
“The Yankees, the world’s best mechanics, are engineers the way Italians are musicians and Germans are metaphysicians:  by birth.  Nothing could be more natural for them to bring their bold ingenuity to the science of ballistics.”

This quote reminded me how the entire country was inspired during the space race.  Verne predicted it 100 years early.
“The whole country had a case of moon fever.”

This was obviously a time before OSHA:
“Several workers, it is true, paid with their lives for the rashness that is inherent in such dangerous work; but those deplorable accidents are impossible to avoid, and Americans are not inclined to worry about such details.”

Jules Verne cracked a joke in the book about the French . . . and he is French!
“The cablegram was perhaps a hoax, especially since it had come from a Frenchman.”

The book also contained exciting predictions that I am still waiting for:
“Within twenty years, half the people on earth will have visited the moon!”

Overall, From the Earth to the Moon was a fascinating read on many levels and a great adventure.