The Cay by Theodore Taylor 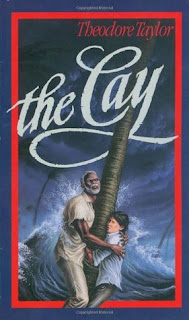 The Cay is an epic adventure set in the Caribbean during WWII that involves a torpedoed boat, being stranded on a tiny dot of an island, and racism.  Phillip is a young boy living on the Caribbean island of Curacao.  At the start of WWII, it is exciting to him that German submarines have been spotted around the island.  Phillip’s mother freaks out about the submarines and wants to return to Virginia with Phillip leaving his father on Curacao to work in the oil industry.  As my ten-year old son Kile said, “That is a bad idea to leave on a boat when there is a submarine sinking ships lingering around the island.”

It was a bad idea as not too long after they leave the island, their boat is torpedoed and Phillip finds himself on a raft with an old West Indian Man, Timothy, and the cook’s cat, Stew Cat.  Phillip is blinded in the sinking and depends on Timothy for his survival.  Phillip’s mother has told him that black people “are different, and they live differently,” but Phillip soon realizes that people are people that Timothy is an exceptional person.

For some reason my eight-year old wasn’t very interested in this story (maybe because it was too much above his level), but ten-year old Kile really enjoyed this story.  We took turns reading it out loud so that his brother could listen, but Kile would often keep reading for pages as he was so caught up in the story.  They read this book for the Youth Book Club hosted at the Kewaunee Public Library.

SPOILER ALERT
Kile was almost brought to tears at the story’s conclusion, but what saved him was the survival of Stew Cat.  Knowing that Phillip wasn’t alone and at least had a cat cheered Kile up immensely.
SPOILER END

Kile rates this book as “good” and I quite enjoyed it as well.  It was a great adventure story, but also a great story of learning to not judge people by their appearance.  The one problem we had was reading Timothy’s West Indian accent.  Kile had never read a book like that before, but soon caught the hang of it.