Star Wars: Last of the Jedi (#9) – Master of Deception by Jude Watson 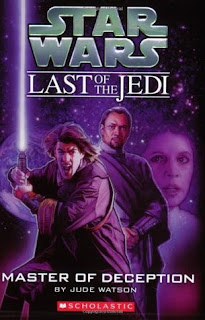 On Alderaan, a child with special abilities is reported to the Empire.  This child is Princess Leia.  The Emperor sends Inquisitors Ferus and Hydra to find this child.  Ferus is a secret agent for the Rebellion.  Leia’s adoptive father, Bail Organa, tries to hide her from the Empire while also searching out the traitor in his midst.  There is also a secondary story of Rebels on a Secret Mission.

Kile (my ten year old son) checked this out from the library, but hasn’t read the previous eight books which are not available at the library.  I found the first story in this novel set on Alderaan to be very interesting with great characters, but I thought the secondary story of the secret rebel mission to be very confusing.  I was not sure who the characters were and they were not fleshed out in the story at all.  Kile enjoyed the book, but felt the same as me that the Alderaan story was great, but the secondary story was confusing.  He is looking forward to the next book in the series which he also checked out.