A Christmas Party by Georgette Heyer 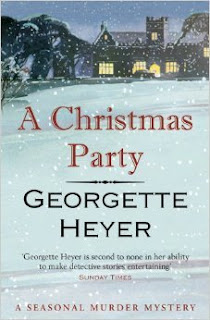 A Christmas house party has been planned in the English countryside that has brought together a motley crew of characters that seem to share a mutual disdain for each other.  When one guest in murdered, the local police call in Inspector Hemingway from Scotland Yard to solve the crime.  Which one of the house guests is the murderer?

This is the first Georgette Heyer mystery that I have read, but I am a huge fan of her Regency romance.  I’ll admit this one read a bit slow for me and I think I need to try out another of her mysteries to see if I like them or not.  The fact that almost all of the characters were extremely unlikeable made it hard for me to get into the novel.  The mystery itself was very clever.  I had a suspicion about the murderer, but they way it was all put together was unique and very interesting.

Overall, A Christmas Party was a clever mystery with unlikeable characters.  I need to read more of Heyer’s mysteries to determine if I like them or not.