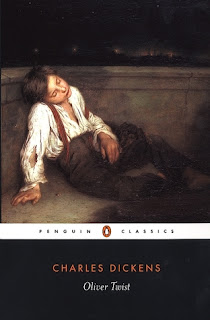 Oliver Twist was the Back to the Classics pick for January.  While I’ve read several Dickens novels, I had never read Oliver Twist.  I have a hatred for the musical after being forced to watch it in middle school, but I surprisingly didn’t remember much of the story besides, “Please Sir, I’d like some more.”  I both read and listened to this book.  I really like the Amazon feature that links together the audiobook and the kindle edition.  It was a great way to experience this novel.

We had a small book club gathering in January due to the warm weather of the South calling away some of our members from our northern Wisconsin clime.  We still had a good discussion and I look forward to discussing Dickens again in the future with the Back to the Classics Book Club.

Oliver Twist was a surprising look into the dark side of Victorian England.  The Poor Act had just been passed as society was sure that the poor were taking advantage of the system.  Dickens used his experiences as a child to show what life was life for the poor in England.  Oliver Twist was born in a poor house by his unwed mother who passes away shortly after his birth.  Oliver lives in a system where those in charge take advantage of the system.  They complain about the poor while they feast on fine food with fine silver.  The woman attending his mother at this birth stole the medicine that was left.  Alcohol meant for medicine for the poor was used for fun by those in charge.  I was horrified, but it was interesting to see corruption has not started just in modern times.

After a series of unfortunate events, Oliver runs away to London, he was taken in by Fagan’s gang.  Fagan is referred to as “The Jew” throughout the novel, which was jarring.  This novel was published as a serial.  Audiences reading it at the time complained and Dickens lessoned his use of the term.  Oliver is an innocent amongst the thieves. It had a great adventure story with Fagan’s gang, and how Oliver kept getting swept into and out of the gang.  Bill Sykes is one of the evilest villains in literature.  The story of his and Nancy’s relationship is an interesting and sad look into domestic abuse.

This was only the second novel written by Dickens, and we discussed that you could certainly tell.  The end of the novel was very scattered, and frankly parts did not make sense.  I also watched a couple of film versions of Oliver Twist.  It was interesting how they tightened up the ending and made it make more sense.  I thought it was interesting that the 2005 version didn’t look at all in Oliver Twist’s heritage, which was a major focus of the novel.  We also discussed how this would have been one of the first “social” novels that took a look at how the lower classes lived at the time.  It would have been very different than other literature at the time.

“For the rest of his life, Oliver Twist remembers a single word of blessing spoken to him by another child because this word stood out so strikingly from the consistent discouragement around him.”

“You shall read them if you behave well,” said the old gentleman kindly; “and you will like that, better than looking at the outsides, - that is, in some cases, because there are books of which the backs and covers are by far the best parts.”

Overall, Oliver Twist was a great look into the dark depths of social despair in Victorian England as well as a good adventure story. I’m glad I read it, but David Copperfield and A Tale of Two Cities are still my favorite Dickens novels.

Book Source:  E-book and Audiobook purchased from Amazon.com and I also read from an old antique copy I purchased from an antique store years ago.
Posted by Laura's Reviews at 5:08:00 PM